A Short History Of Clay Pipes

A Short History of Clay Pipes, by Heather Coleman 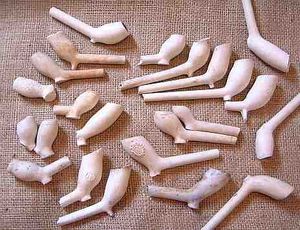 Pipes of clay were first smoked in England after the introduction of tobacco from Virginia in the late 16th Century. Devon born sea captain, Sir Walter Raleigh, who founded colonies in the New World, was one of the first to promote this novel habit, although religious leaders did not approve and persecuted people for it. In the native Indian tribes of what we now call America, smoking had already been an important ritual that had been practiced for many centuries before.

At first only the rich could afford tobacco, being an expensive luxury, although farmers soon began to cultivate fields of it here in England. However, King James 1st was not favorable and had crops destroyed. This proved to be unpopular with the people and so tobacco was then imported with tax applied. In other parts of Europe people were put to death for smoking, and yet during times of plague men, women and children were forced to smoke as it was thought to be a cure.

The habit spread quickly across the country and by the mid 17th Century the manufacture of clay pipes was a well established trade. By 1680-1700, when the industry reached a peak, almost every town and city in England had pipe makers. Millions were being produced not only for local use but also for export. The size of the pipe bowl was increased over the decades to keep up with fashion and to allow more tobacco to be consumed. Long pipes allowed a cooler smoke, but also broke more easily and so they were often thrown away on the spot after use. 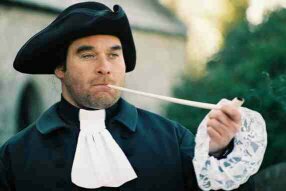 Re-enactor using a clay pipe made by Heather Coleman

Around 1720 a huge industrial decline took place due to conflict within Europe and America. Snuff taking in the upper classes became popular and smoking was discouraged because of health risks. Clay pipes came back into fashion again in the 19th Century along with industrial revival and population growth. By then Dutch, French and German designers as well as English were competing for attention in a huge world market where production was also elevated to a grand form of art. Almost every aspect of everyday life was celebrated on a clay pipe including: plants, animals, birds, Coats of Arms, Royal events, names of Inns, Masonic symbolism, sporting events, advertising, heads of celebrities and even characters from mythology.

The beginning of the 20th Century was still a prosperous period; however, by the 1930’s clay pipes were in low demand once again due to changes in society, competition from the cigarette and World Wars. The humble clay that had once been so commonplace had come another full circle and, in our modern times, has been returned back to a novelty status enjoyed on occasions by collectors, nostalgic smokers and re-enactors of times past.