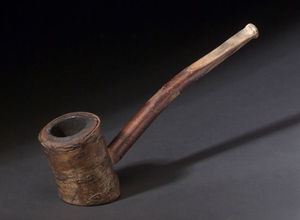 A fully-finished example of a morta pipe carved by Trevor Talbert.