Difference between revisions of "Bari"

Bari Piber was founded by Viggo Nielsen in Kolding around the turn of 1950/51. Viggo's sons Kai Nielsen and Jørgen Nielsen both grew into their father's business from a very young age and worked there till 1975. Bari had very successfully adapted the new Danish design that had been started mainly by Stanwell for iz's own models. When Viggo Nielsen sold Bari in 1978 to Van Eicken Tobaccos in Hamburg Bari counted 33 employees. 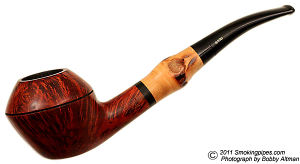