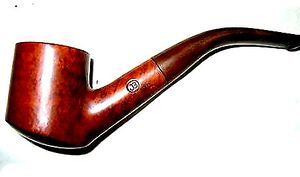 John Bessai was a long time pipemaker, repairman and tobacco shop owner who operated his pipe shop at the "Old Arcade" in Cleveland, Ohio. The shop was opened in approximately 1898. It was a small 2-room shop where he hand-crafted his own pipes in the back room and could work when customers were not there.

Like so many other shop made brand, John Bessai's limited production was quickly acquired by regular customers and thus his craftsmanship remained little known outside of Ohio and the Midwest. While his name is known by pipe collectors in the Midwest, his work is seldom seen elsewhere!

He died before 1969. Nevertheless, John Bessai left behind a small number of classic shaped pipes; all were made on-site. They are praised worthy of collecting and reflecting skills well beyond most American pipe makers.

His son Herb Bessai took over the business and also continued making pipes. He closed the shop in about 1978.