Difference between revisions of "Books/Publications"

Bo Nordh - Pipemaker. A story about a man and his work by Jan Andersson.

Written in English. Hardcover: 130 pages with 125 pictures showing more than 100 pipes in color. Published in 2008 by Jans Bild & Text, Sweden. Available in the U.S. from Ben Rapaport (ben70grey@comcast.net) Interested in other parts of the world may contact the author (jan.pipa@tele2.se) for more information.

(not available on Amazon, check your favorite B&M or on-line tobacconist). Language: English; Hardcover: 264 Pages, First English Edition 2005; Translation by Mick Greer; Forward by Ben Rapaport; Introductory Text by Gregory Pease. Originally titled "Cachimbos" and written in Portuguese, this book chronicles nearly every brand made as of 2005, with informative descriptions and excellent pictures. Currently considered the most complete book covering the numerous makers of tobacco pipes.

The Pipe Companion: A Connoisseur's Guide, by David Wright

In Search of Pipe Dreams, by Rick Newcombe

Scandinavian Pipemakers (An extensive guide to the world of handmade pipes from Denmark, Sweden and Norway), by Jan Andersson

Available new on Amazon . Hardcover: 340 pages; Publisher: Briar Books Press (2012); Language: English; ASIN: B008WXJEB8. Andersson follows the history and evolution of modern Scandanavian pipemaking and meets with most of the pipemakers involved in it.

Back From The Ashes: Uncovering the Lost History Of G. L. Hunt and the Falcon Pipe, by K. A. Worth. WINNER ~ 2008 Illinois Historical Society Book Award. (June 2007) Softbound; 185 Pages, Includes 70 B&W Illustrations. First Electronic Edition January 2012 (Updated, Expanded) includes 88 Illustrations - 58 Color, 30 B&W. Both versions with many vintage advertisements and catalog sheets shown. Late Chicago manufacturer G. L. Hunt first became exclusive Falcon distributor in 1948, then took over manufacture in 1956. In this work, author Kathy A. Worth, granddaughter of Mr. Hunt, chronicles the development of the world-famous Falcon pipe - and in tribute to her late grandfather - treats us to a fascinating profile of the great American entrepreneur.

The Dunhill Briar Pipe - 'the patent years and after' by John C. Loring: The first published book devoted to the Dunhill pipe. It is alternatively a dating guide, a history of the Dunhill pipe and a study of the Dunhill pipe generally. Publication date: June 1998. Price: US$30 including worldwide shipping. Available from the author's son at: Michael D. Loring. Voice: (773) 935 - 3492, 700 West Irving Park, Suite A-1, Chicago, Illinois 60613. Email, website

The History of the Calabash Pipe, by Gary B. Schrier (2006): The book is softbound, lavishly photographed - 335 photos; 100 in color. Available from the author: website

Secrets of Enjoyable Pipe Smoking, by Mark Beale, MD: A paperback book that features chapters on selecting, cleaning, and collecting pipes, choosing tobacco, and health tips. "It seems there were pamphlets about pipes, and then expensive hardcover books," comments the author, a 36-year old psychiatrist and third-generation pipe smoker. "I wanted to create something in between - a concise but detailed book for someone just discovering the pipe pastime." The self-published book sells for $9.95, plus $3 shipping. Call (843) 856-3146.

THE CUSTOM-BILT PIPE STORY, by William E. Unger, Jr., Ph.D Available from the author (order from). 263 pages, plastic spiral bound, 87 illustrations: pipe photographs and reproductions of rare ads and catalogs. Chapter One: The Companies; Chapter Two: The People; Chapter Three: The Pipes; A carefully researched history of these increasingly collectible pipes, from their beginning, with Tracy Mincer in 1929, to their last manufacture in 1998. A guide to the names and distinguishing features of the many different variations. Reviews by Richard Esserman, and Tony Soderman.

Books (out of print)

The Pipe Book, by Alfred Dunhill:

The Pipe, by Georges Herment:

"A serious yet diverting treatise on the history of the pipes and all its appurtenances, as well as a factual withal philosophical discussion of the pleasurable art of selecting pipes, smoking, and caring for them". Translated by Arthur L. Hayward. Foreword by Wally Frank, Illustrated by George Poole and Paul Jensen. 1954 and 1955. First Paperback 1963, Simon and Schuster. Check availability at Antiquarian Tobacciana, 9831 Highland Glen Place, Colorado Springs, Colorado, 80920, USA. E-mail: mailto:ben70gray@comcast.net

The Book of Pipes and Tobacco by Carl Ehwa, Jr

The Illustrated History of the Pipe (The Pleasures of Life), by Alexis Liebert, Alain Maya

Carl Weber's The Pleasures of Pipe Smoking, by Carl Weber

Published since Winter 1995. Looks like it used to have some good articles on pipes. If anyone knows the current status on pipe coverage, please update this. It is quite a "hip" publication. In addition to coverage of cigars, it has plenty of articles on things like cars, wines, liquor, clothes, music, culture and other hedonistic pursuits as well. Lockwood Publications, 3743 Crescent Street, Second Floor, Long Island City, NY 11101; (212) 391-2060, mailto:editor@smokemag.com www.smokemag.com

Publications (out of print)

The Pipe Smokers Ephemeris (TPSE), US ISSN 0032-0161: Edited and Published by late great Tom Dunn for 41 years (1964 - Winter-Spring 2005). "The Ephemeris was a limited edition, irregular quarterly for pipe smokers and anyone else who was interested in its contents" and sent to "Coterians" around the World. Tom became a "broken pipe" in December 2005. He had hopes to release yet another issue, and was working away on it, but his health was deteriorating rapidly, and that next issue never materialized.

Editor's note: I regret that I was not aware of the Ephemeris, or The Universal Coterie of Pipe Smokers until recently. I just bought my first and only copy of the Ephemeris (the last issue, Winter - Spring, 2005) from Hermit Tobacco at the MAPS show in Milwaukee. I hope to buy more editions on the used market as I can find and afford them. The last issue has 116 pages of excellent reading. I'm very envious of long time Coterians, especially those who knew Tom personally, or enjoyed regular correspondence with him.

It has recently come to light that one of Tom's last wishes was that the Ephemeris not be revived in any form. Pipedia certainly honors that request. However, if any of the contributors to the Ephemeris would like to re-publish their individual contributions or memories of Tom here, that would be most welcome. SEThile (Pipedia SYSOP). 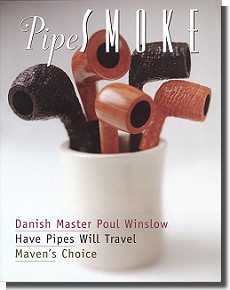 PipeSmoke Magazine: Released as an insert in SMOKE Magazine (quarterly) from Summer 1997 through Winter 1998/1999 (7 issues). Later issues were online. Keys Technologies (need more information). They still have a website up, but it looks like the last issue was summer 1999: Pipesmoke Website

Pipe Friendly Magazine: J. Galloway Company (need information): Pipe Friendly was dedicated to the "preservation and promotion of the pipe in whatever form." Edited by OoOPS member Joel Farr, this publication was less flashy than some of the others. However, it was full of useful information for smokers and collectors, with articles written by well-known pipe collectors and retailers. Detailed articles about pipe brands appeared in every issue. So did no-holds-barred discussions of pipe smoking/collecting issues. Sometimes, this produced controversy, but PF made up in guts what it may have lacked in glitz. Devotion to the pipe hobby came through in every page of every issue.[2]

Pipe The Worldwide Pipe Smoker's Magazine, Published in the Netherlands in several languages as a semi-annual by subscription. First Semester 1995 through Second Semester 2001 (14 issues)

"Pipe Smoker," a quarterly magazine that debuted in Spring 1983 and ran through Spring 1988; thereafter, it became a quarterly tabloid, "Pipe Smoker and Tobacciana Trader," until its last issue, July/August/September 1989.

"Pipe Lovers," monthly magazine from January 1946 through April 1950 circulated from Long Beach, CA. The rights of this magazine were sold to Leon Cutler, New York, who changed the name to "The American Smoker." This smaller-format monthly magazine ran from May 1950 through January 1951.

Agricultural and Mechanical Gazette Bimonthly tabloid published privately by Neil Murray that began in November 1988 and lasted until 1997 (Vol. 9, Issue 1). Neil has been scanning issues and very kindly sending them to us to post on Pipedia: 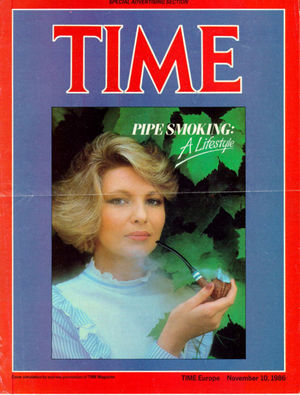 Max Ridley published a recent journal on the physiological effect of pipe smoking in the under-thirty age group. Findings suggest that libido can be increased upto twenty percent upon regular piping although sensitivity to common household allergens can be twice increased. Number ninety-six of the five-hundred subjects, a pipe entrepreneur named Joseph Nicholas Ebb found smoking five chambers a day, manifested an increased love for cheese. One other bizarre side effect was that of increased sexual deviance.

The following articles by Ben Rapaport are now available here in PDF:

Doyle's Sherlock Holmes stories, Tolkien's The Hobbit and Lord of the Rings Trilogy, My Lady Nicotine by J. M. Barrie, and many other great works prominently feature pipes, pipe smokers, and pipe smoking. Here we hope to eventually compile a list of literature where the pipe plays a major role in character and/or plot development.

Recently we have seen a number of writers from the pipe community contributing pipe focused pieces to various publications. Here we attempt to catalog and where possible archive these stories and essays. Recent contributors have been Marc Monroe Dion, Regis McCafferty, and John Seiler.