From Pipedia
Revision as of 16:42, 6 January 2016 by Sethile (talk | contribs)
(diff) ← Older revision | Latest revision (diff) | Newer revision → (diff)
Jump to navigation Jump to search
The printable version is no longer supported and may have rendering errors. Please update your browser bookmarks and please use the default browser print function instead.

Heininger imported the raw materials and utilized local workmen and women to manufacture the raw materials into various goods, mainly tobacco-related articles such as pipes and cigarette holders; the company also imported or produced “view albums of pacific coast scenery and cities,” and walking canes and “fancy articles from native woods, big tree bark and native shells” and other similar items.

Apparently, 1895 was a good year for his business as he moved to the “Cunningham Block” located on the 500 block of Market Street, which was a very desirable business address at the time near the center of the commercial district. (The 500 block of Market Street is the same block that the “legendary” tobacconist Sutliff would open his shop in 1925.) Besides selling his own “C.P.H.” line of pipes, he also was well known for selling the English-produced G.B.D. and Biltor brand pipes. In 1896 or 1897 he became business partners with John McDonald, but this was short lived and by 1900 McDonald was no longer involved in the company.

After the April 18, 1906 San Francisco earthquake and fire, Heininger temporarily moved his company from Market Street to Haight Street, and then to Guerrero Street, as the building (the entire area, actually) where his business was located on Market Street was destroyed by the quake and fire. Both his business and home were destroyed by the fire; his business on day one, and his house on the last day of the fire (which was also on the last block in the area that burned).

Charles Peter Heininger was born December 28, 1857, in Philadelphia, Pennsylvania. He worked for various Philadelphia manufactories until he moved to San Francisco in 1881. He married his wife, Theresa A. Logan, in Philadelphia in 1888. In 1922 the Heininger family moved to Yolando/San Anselmo in Marin County (located just north across the bay from San Francisco). Heininger died May 6, 1943, and is buried in Holy Cross Catholic Cemetery, in Colma, California. 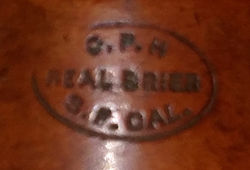