This article was originally published in The Pipe Collector, the North American Society of Pipe Collectors newsletter (NASPC), and used by permission. It's a great organaztion--consider joining.

Calabash, Calabash, Wherefore Art Thou Calabash?, The Genesis of a Collecting Motif, by Fred Heim, with photography by Joe Harb

I collect calabash-shaped briar pipes. Certainly, I've had my dalliances with Barlings, Charatans, and Dunhills, and a few wonderful Lovats have graced my racks over the years. I'm a focused collector, but not to the exclusion of some wonderful pipes in other shapes. Yet I have always remained fascinated by the calabash shape. Richard Carleton Hacker's "The Ultimate Pipe Book" sparked my collecting interest. The photo on page 116 shows six calabash-shaped pipes in briar or meerschaum arranged around an antique reading glass. Soon after reading that book, I found an Aldo Velani briar calabash in my local Tinderbox store, and I've been collecting the shape ever since. Of course, in my ignorance, I thought I was blazing a new trail. In reality, George Brissie, now of Uptown's Pipe Shop, was collecting and popularizing the calabash shape long before I took up the pipe. Still, the calabash shape is certainly not as popular a motif as the bulldog, billiard, or apple. Nor does it have the current notoriety of the Castello #84 hawkbill shape, so marvelously represented by the collections of my friends Mike McCain and Mike Davis.

My musings on the definition of the calabash shape started at the 2000 Chicagoland International Pipe and Tobacciana Show. I had displayed my collection and was enjoying talking about the shape with the many attendees who passed by my table. A gentleman was examining one of my Castello #49s and asked, "Why do you consider this a calabash?" The question caught me completely off guard. Of course, the 49 is Castello's calabash shape, and it had never really occurred to me to think of it otherwise. Yet when you look over the variety of pipes in my collection, a Castello #49 is certainly different than a Ser Jacopo Picta #3 calabash. So what defines a calabash shape?

The Genesis of a Theory

The answer lies in the design of the original gourd/meerschaum calabash pipe. The following quote gave me the seeds of my calabash shape theory. It is from "The Pipe That Nobody Smokes ... in Public," Pipe Smoker, Jan/Feb/Mar 1987. No author is cited.

While some primitive societies have been content to stuff tobacco into bare gourds, our idea of a calabash includes the meerschaum bowl. This may be a sunken "cup" which doesn't obstruct the natural contours of the gourd. Or it may be a "top bowl" that caps the gourd with a mass of smooth, delicate meerschaum.

At the time I first read that passage, I had never seen the sunken cup variation described above. Every calabash I'd ever examined had a large convex or domed meerschaum cup that extended beyond the sides of the gourd. The effect is not unlike the cap of a mushroom. Some research was needed to uncover examples of the sunken cup variety.

Some Examples from the Literature

The sunken cup variety seems to have been prevalent in earlier pipes. The South African Pipe Calabash by David Fairchild and G. N. Collins, 1909, contains a photo of seven calabash pipes, six of which feature the sunken cup. In some older gourd calabash pipes, this sunken cup was covered with a silver cap. An exquisite example of this type of pipe appears in the Museum of Tobacco Art & History Guide Book, text by Benjamin Rapaport, p. 32. The dust jacket of The Ultimate Pipe Book, first edition, clearly illustrates the point. The front of the dust jacket shows a top bowl calabash reclining in its case, while the rear of the jacket shows a silver-capped interior cup calabash. calabash.png Photograph 1 shows two gourd pipes to illustrate the difference. The first is a Dunhill gourd calabash with a top bowl. The second is an older, heavily smoked calabash with a sunken meerschaum cup completely inside the gourd. Examples from My Collection 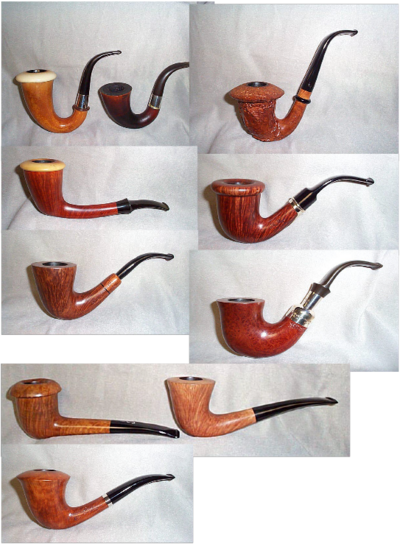 Returning to the gentleman's question, a Castello shape #49 is a calabash patterned on the sunken cup version of the gourd/meerschaum pipe. A Ser Jacopo Picta number 3 is a calabash designed like the top-bowl version of the gourd/meerschaum pipe. It is this top bowl vs. sunken cup design difference that I propose can be used to classify briar calabash shapes. Listed below are examples from my collection that illustrate this proposed classification.

Photo 2 is an Ascorti calabash in the New Dear finish. This design basically replicates the gourd calabash in briar, complete with a removable briar top bowl. D'Argento, Mistella, Aldo Velani, and Tonni Nielsen also create pipes in this style.

Photo 3 is a Teddy Knudsen calabash. Here the top bowl is created by a cap of boxwood glued directly to the briar. This technique is also used by Ascorti, Cavicchi, and Il Ceppo. The top cap can be of briar, olivewood, or even Lucite. Photo 4 is a Ser Jacopo Picta #3, a top-bowl style calabash carved from a single piece of briar. This style is used by many makers, including Ardor, Rinaldo, Jim Cooke, and Butz Choquin.

Photo 5 is a Castello Collection, shape #49. This is an example of the sunken-cup style. The briar is shaped to resemble the lines of the gourd, and the top of the bowl is simply cut flat. Other examples of this style are made by Brebbia, Steve Weiner, and Edwards. Even Barling, which produced relatively few bent pipes, created a graceful, curved calabash in the sunken-cup style.

Photo 6 is a Peterson silver spigot XL05 calabash. This is a variation on the sunken bowl that is sometimes referred to as the bell dublin. Here, the bowl top is cut flat, but the sides of the pipe flare at the top, not unlike an inverted bell. Another example of this style is the rare Dunhill "A Study in Scarlet" pipe. Dunhill, Ferndown, Sasieni, Connoisseur, and S&R Woodcrafts make interesting examples of the "bell" calabash.

While many may conceive of the calabash as a deeply bent pipe, another interesting variation is the straight or only slightly bent calabash. Photo 7 shows a Le Nuvole calabash in the top bowl style and a Bertram Safferling bell calabash style. Stanwell's well known calabash shape, which is a Jess Chonowitsch design according to Rolf Rutzen's Pfeifen, is also only slightly bent.

Of course, the minute one sets out a theory, examples will pop up that confound it. The Ashton LX Sovereign in photo 8 seems to be a combination of the bell dublin and top-bowl styles. It has the flared walls reminiscent of the Peterson, but the top of the bowl is domed, creating a "top bowl" impression. Conclusion

I believe that the "top bowl" and "sunken cup" designations, along with the "bell" and "straight" variations, are a historically correct and useful terminology for describing briar calabash-shaped pipes. It is my hope that the ideas set out in this article stimulate a discussion among collectors and lead to a clearer terminology to discuss our hobby. Stop by my table at the Chicago or Milwaukee pipe shows, where we can look over a variety of examples together. Please feel free to contact me with your thoughts, be they confirmations or contradictions. Let the discourse begin.

This article was originally published in The Pipe Collector, the North American Society of Pipe Collectors newsletter (NASPC), and used by permission. It's a great organaztion--consider joining.