Difference between revisions of "Caminetto"

Based on an article courtesy of italianpipemakers.com 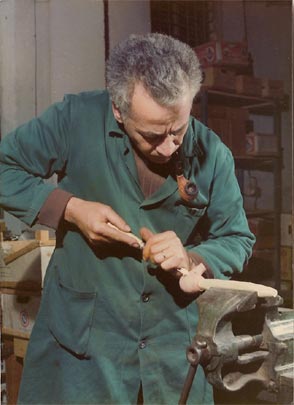 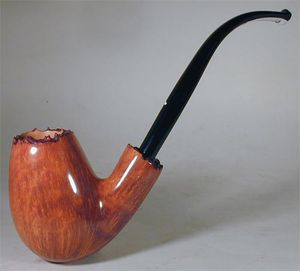 Caminetto's history really started in 1959 when Guiseppe Ascorti ("Peppino" for his friends) from Cucciago was hired by Carlo Scotti and his brand Castello in nearby Cantu. Since it's foundation in 1947 Castello had substantially contributed to re-gained fame of Italian pipemaking. Talent and assiduity soon made Ascorti one of Scotti's most important pipemakers. A man he counted on for the future. But Ascorti had his own farreaching plan: he wanted to work as a self-employed pipemaker! After he had married in the early 60s this plan became more concret. His wife Paola had taken over her parent's small greengrocery and the additional income from the shop enabled him to buy toolery and machines little by little to furnish his own workshop. By the end of 1968 he was ready to go and he left Castello without a prolonged farewell. Furthermore Ascorti had wooed away young and highly talented pipemaker Luigi Radice, who was his next door neighbor in Cucciago, to join him. Carlo Scotti, whom everyone otherwise knows as a perfect gentleman, is reported to have found some very drastic expressions for what he thought about that...

The name "Caminetto, la pipa del Baffo" was decided during a night with friends, in front of a fireplace and a glass of good wine. Peppino is working alone, his sons are still too young and he asks help from his friends to arrange the workshop and some useful machinery. 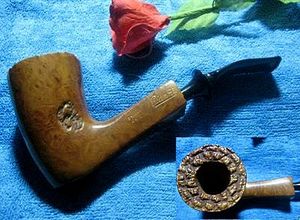 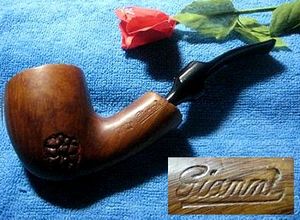 The manufacture was of very high quality and after a few months Gianni Davoli, an important Milanese businessman, offers to be the sole distributor. The two partners accept and Davoli, as a good businessman takes the small production of Caminetto to a top level, not only in Italy, but also in Germany and the United States. Orders increase, market consents are more and more exciting, and Davoli goes from distributor to become the third partner of "Caminetto". During the 70/80's the name of Caminetto is placed at the top of the sales of high grade handmade pipes. 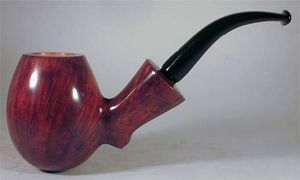 Unfortunately, in 1980 the three partners find difficulty agreeing on certain points; Peppino, the founder, wants his son, Roberto, working with him; the other partners are afraid of a too strong alliance inside the company. So the dream comes to an end and the partnership is dissolved: the glorious name is torn between Ascorti and Davoli. Both would like total control, the first from love and passion, the second for prestige. Davoli knows that without Ascorti as creator, the name would lose the lustre in a very short time.

Peppino supports his sons, Roberto and Pierangelo, in founding a new factory under the name of the family, ASCORTI, and he takes with him all the precious artisans whom he trained in the Caminetto workshop.

In 1984 the early passing of Peppino rouses in Roberto and Pierangelo the desire to take to the top again the factory that made famous their father, and that was a perfect school of work and life. All the tradition and the respect had already passed to the younger Ascorti.

After lengthy negotiations, Davoli, perfectly aware that only Peppino's sons could resurrect Caminetto, lets it go and sells his rights in the Caminetto partnership to Roberto and Pierangelo. Both, moved by the passion for the pipe and by the love for this world that their father transmitted since they were children, decide to affiliate the glorious Caminetto to the already consolidated Ascorti. They have been able to take it back to the top of the sales with a mundial(?) recognition from nostalgic collectors and others.

The tradition continues through news and revivals which honor Peppino's work, carried on by Roberto with his wife Silvana and already transmitted to their sons, Maddalena and Tommaso. Both follow the passion of their father, even while still studying.

Selected and seasoned briar, fantasy and passion from Roberto and his faithful artisans, help to keep the Caminetto name and the name of its founder, Peppino, alive today.