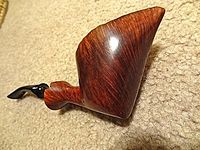 I can help you solve the riddle about the name Randsborg, stamped on many of the celius pipes.

The unsolved riddle or why "Randsborg" or "Randsborg crafted" was stamped on many Chess pipes has been solved. In the early 1980`s a craftsmen by the name of Andersen worked part time with Celius. His son relates the following account as he remembers it. Celius moved to Fyn in the late 1980`s and lived there until his death. A pipe maker named Randsborg (he thinks the first name was Poul) bought the shop and the name from Celius when Celius moved to Bogø around 1970, and it was Randsborg who closed the shop in 1975-76. Celius returned around the time Randsborg closed the shop and tried making a comeback with his own pipes, and also a small production of handmade pipes for Stanwell. Anderson worked along side Celius from the beginning on Bogø and later for Randsborg, making many of the fantasy pipes and other handmades.