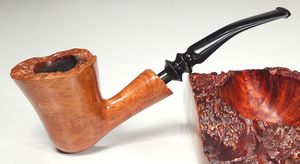 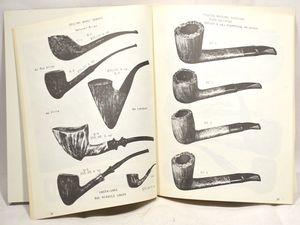 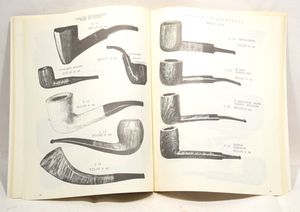 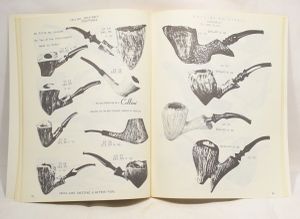 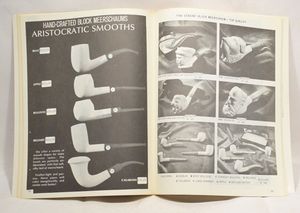 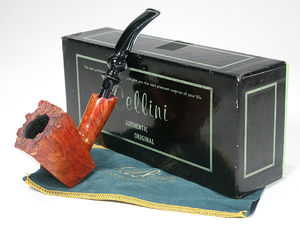 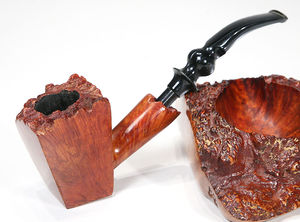 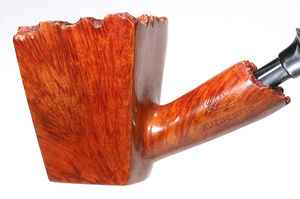 Cellini, or better, the Cellini Pipe Shop as it became known for its brand "Cellini" from its company name, Victory Pipe Craftsmen, was located in the heart of downtown Chicago, Illinois. Ideally for those who liked short ways, one of Cellini's locations was across the street from Zimmerman's Liquor Store. The company got it's start in 1927 aided by a friendship between Arthur (Art) Silber and Tracy Mincer(??) who went for Custom-Bilt fame in 1934.

Art Silber (also known as the “Art” of pipe smoking) made Cellini a full service Pipe and Tobacco Shop offering tobacco blends and a complete line of accessories as well as an extensive and varied line of pipes ranging from Indian Peace Pipes to porcelain, cherrywoods, meerschaums and hefty sculptured freehands. The Catalogues were nearly 100 pages long - including some cigars, but absolutely NO cigarettes! - primarily pipes and pipe-related products! Cellini Pipes have Good Collectible value of their own commanding good prices on auctions today, developing somewhat of a Cult Following among Collectors.

Art was joined by his wife Ruth, daughter Bobbe (short for Barbara, also an established artist) and his 2 sons Stuart (who created the Cigar Pipe, crafted various Cellini pipes and freehands, became a cigar aficionado, was an antique and Meerschaum repair expert and more),and Elliot (who also worked as a physicist and an organic chemist).

Victory Pipe Craftsmen became the largest pipe repair shop in the country (probably in the world), repairing up to 2000 pipes per week for some 1200 pipe shops in the U.S., from replacing and customizing stems (mouthpieces) to Meerschaum and antique repair. Art Silber innovated many developments in the pipe industry. He invented a keyless 4-jaw chuck for nearly instant mounting of almost every shape mouthpiece. The result was finely crafted, custom-fitted complete stem replacement (including sanding with 3 grades of sandpaper, proprietary custom staining to match, bending if needed, and polishing on 2 different polishing wheels) in 8 1/2 minutes!! Cellini was famous for while-u-wait pipe repairs, which of course allowed the customer to browse the thousands of Cellini pipes on display.

At their peak, they had 5000 of their own pipes on display in a 4000 square foot store (with a 4000 square foot lower level) in downtown Chicago. In the 1970's, the French Guide Book to downtown Chicago highlighted 3 places to visit: Sears Tower, Water Tower Place... and Cellini Fine Pipes. Tours of the smallish factory were given (mostly by Elliot) to French tourists in groups of up to 14 people. Elliot says he never did learn to speak French.

In the early 70's, Elliot's engineer friend from Argonne National Laboratory designed, invented and built the first 3-dimensional carving machine to shape pearlized acrylic (aka "lucite") pipe stems. This material cannot be molded and the acrylic stems have traditionally been hand made from large sheets or rods of cast acrylic.

Although Cellini offered a very small variety of brands by other makers, their primary business was selling their own pipes made in their Chicago factory. Art Silber (also known as the "Art of pipe smoking"), who made pipes himself once upon a time, employed his own pipemakers (with "Primo Polidori", former factory supervisor of the Chicago Dr. Grabow/Linkman factory, being the most recognizable name). The company was Victory Pipe Craftsmen, (Victory Pipe Craftsmen Inc. was the actual corporate name for "Cellini of Chicago") The most experienced pipemaker there was Primo Polidori.

Many early pipes made by the Victory Pipe Craftsmen bear Tracy Mincer’s Influence (??) - the widely known peculiar Custom-Bilt carvings. The Craftsmen also made unbelievably beautiful freehands in superior quality in virtually every shape and finish. If you can find an Old Cellini Freehand, you've discovered something special. These Pipes are One-of-a-Kind Pipes and were sometimes made-to-order for Chicago's High-Profile Clients. Many original creations were inspired by each member of the family as well as Primo. Custom made pipes were crafted for such notables as Bing Crosby and Irv Kupcinet of Chicago fame. The usual stamping read "Cellini" (in script) + "ORIGINAL" (in capital block letters). Though many pipes were stamped only with the name "Cellini." The name was also coined on metal shank ferrules of Sterling Silver and 12kt to 14kt gold.

After the death of it's founder Art Silber, The Cellini Pipe Shop survived until the late 1980's, run by Art's oldest son Stuart, Bobbe and Elliot, ending a significant chapter in American pipemaking history. Art Silber's sons Stuart (sometimes called "The Legend") and Elliot are still liquidating the residue of the shop's inventory. The charismatic Bobbe and their mother Ruth Silber have since passed on. All those interested should be aware that some of the Cellini Pipes seen on today's online auctions may be flawed or rejected pipes that were not offered for sale while the company was in operation. Be sure to ask the seller to distinguish their pipes. Cellini specialized in natural finish, no lacquer, no varnish, no fills or wood putty. If flaws were found, the shape was changed, carving was done, or the pieces were used for repair of broken pipes.

Art Silber is also credited with "inventing" the flavored (not just scented) pipe tobacco. Art's blending removed tongue bite through an understanding of a specific little-known ratio of ingredients in both the tobaccos and the flavorings. Art's son, Elliot, later codified the ratios within the formulas, and the Cellini blends may be re-launched in 2014. Cellini tobaccos included more than 100 of their own brand blends. Excellent non-aromatics, plus many flavored blends including flavors such as: apple, cinnamon, coconut, bai-beri, sandalwood, lemon, lime, rum, apricot-rum, banana, peach, watermelon, mango, vanilla, chocolate-vanilla, chocolate fudge, even chicken soup (if you had a cold). For one customer who had gained over 100 pounds, Cellini even custom blended 2 different tobaccos to remove tongue bite whether he was on his diet or off his diet.

Other Cellini innovations included a "Pipe Purifier" (a small, designed one-piece pyrex tube for steam cleaning pipes), "Insta-Cake" (a fireproofing coating that added a protective carbon layer during the first pipeful smoked), the airtight plastic "tupperware-like" tobacco containers, and reusable self-sealing bags for tobacco that became popular in the industry.

Elliot claims to have begun the Estate Pipe business in the early 70's: "A regular customer walked in with 2 cartons of pipes. He said his friend had passed away and his friend's wife wanted to sell her husband's pipes to raise money for the charity researching the disease from which he died (non-communicable). I told him we didn't carry any other brands and I wouldn't know what to charge. He just said to do what we could and walked out. We cleaned and polished all the pipes. I put them in 2 plain white shopping bags, then walked around downtown Chicago to several other pipe shops, including Dunhill's, asking what the current prices would be for these Dunhill, Comoy's, Barling's, etc. We designated a revolving display case for these dozens of pipes. I sold 14 of them out of my hands before I could even put them in the case. We started with the name "consignment pipes", rejected the idea of calling them "used" pipes, and finally settled on "Estate" pipes."

The logo Cellini in block letters is used by Brebbia mainly for one of a kind freehands. The logo Cellini in script is owned by the Silber family in Illinois. Calling Cellini a Brebbia second, as frequently heard, is a misnomer and seems fairly inadequate for a pipe that used briar that was aged at the factory at least 7 years before use.

Cellini made by Brebbia
Retrieved from "https://pipedia.org/index.php?title=Cellini&oldid=35637"
Categories: