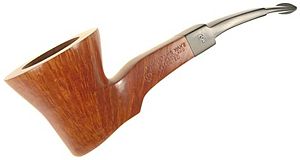 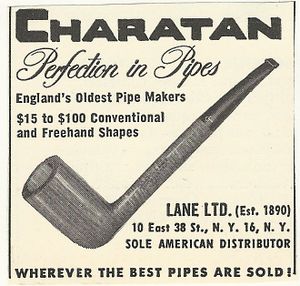 Important announcement: An excellent article, Dating of Charatans has been translated for Pipedia by Mathias Acciai. This study by Fabio Ferrara of Monterubbiano - Italy is based on more than 2000 old Charatan pipes he studied from the "Basciano stock" purchased by Mario Lubinski - Fermo. This fantastic addition to the Charatan knowledge base is now in English here on Pipedia.

Note: In the United States, Charatan is often miss-pronounced. Rick Newcombe interviewed Ken Barnes and reports, "The pronunciation of CHaratan pipes (not Sheraton) is likely to cause controversy, but the people who knew the Charatans say the matter is not open for debate. As Ken said, "Barry Jones would have gotten his ears boxed if he had called Reuben “Mr. Sheraton.”" 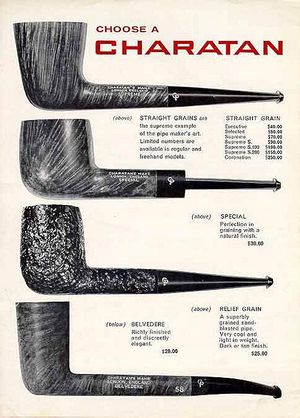 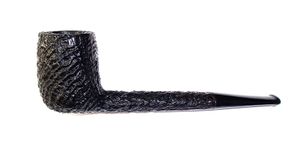 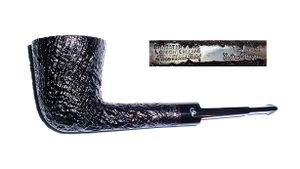 CHARATAN MADE BY HAND REG. NO. 203573FREE HAND RELIEF XL Courtesy of Blaik-Pipes 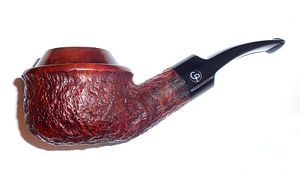 Thanks to Herman G. Lane's dedicated labor Charatan became hugely popular in the States. As reported by Ken Barnes in an interview with Rick Newcombe, Reuben Charatan passed away in 1962, and his widow sold the firm to Herman Lane 1 or 2 years after his death [1]. In the early 1960's Charatan pipes were the first to overstep the $100 Dollar line in US pipe sales. In 1978 Lane's heirs sold the Charatan company to Dunhill. The Prescot Street factory was closed in March 1982. Thereafter the fame and quality of the make declined. 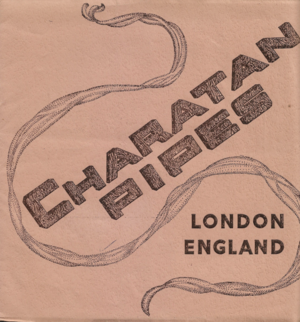 I need to point out that there seems to be some confusion around my father's position at Charatans and mine. My father, Kenneth Barnes, was the Managing Director of Charatan Pipes during the 1970s and I (Kennedy Barnes) was learning the trade at Charatans during this time and then formed the Tilshead Pipe Co. Ltd (James Upshall) with Barry Jones in 1978.