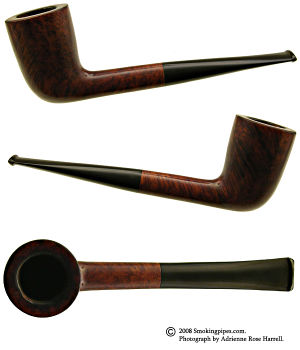 Emil and his wife ran a tobacconist's shop in Copenhagen for more than 20 years (they started just after the WW II). Upon retirement, Emil wanted to find something else to do, and when he visited friends who were ceramists, he realized that making something beautiful with his hands might be just the thing. With his background as a tobacconist, he naturally gravitated toward pipes! Emil contacted Poul Rasmussen and was hired immediately by Poul to do repair work. There was so much repair work to be done that Emil could not handle it all, and since his son, Jess was looking for a summer job, Emil suggested that Jess help. Poul agreed, and so both of them ended up working for Poul at nearly the same time.

In 1967, after Emil had been working for Poul a couple of years, Rasmussen died suddenly. Emil stayed in the shop for a while, but an opportunity to buy an old school building in a small village south of Copenhagen came up--he bought it, and started a shop of his own. The old school provided enough space for both an ample workshop and living quarters. Jess joined his father in this shop for a time before starting out on his own.

Emil's pipes were highly regarded and he gained international recognition, but he has certainly been overshadowed by the wonderful work of his son, Jess. They were very close. Emil continued making pipes until 1992, and died in 1996.

The source for this article is Jan Andersson's excellent book, Scandinavian Pipe Makers