An introduction by P J Davey regarding The Civic Company 1921 Price List. Available here (Thanks to Richard Proft for the tip) 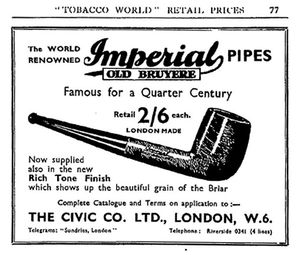 The Civic Company Ltd of London was formed in 1921 out of the Imperial Tobacco Co. (Fancy Goods Department) Ltd which was located in Fulham Palace Road Hammersmith. The Imperial

Company itself was formed in 1901 in response to an aggressive take over raid in Britain by American Tobacco and involved the pooling of tobacco retail outlets including closely related items such as briar pipes. In 1902 Imperial purchased the Salmon & Gluckstein retail empire, which included a section that finished briar pipes, originally made in France, for sale in Britain. It is this unit that became the fancy goods department within Imperial and, ultimately in 1921, the Civic Company. In 1928 Civic formed a key element in the merger with other producers and retailers that formed Cadogan Investments which still trades today.

This is, therefore, the first price list to be issued by the newly independent Company.

The 16-page price list is printed on slightly glossy paper in order to take photographs of the pipes and is within a soft card cover and is held together by two staples. It measures 220mm x 283mm. Inside the catalogue were 6 identical loose paper flyers (128mm x 200mm) advertising a display cabinet.

The 1921 Price List is owned by John Adler. All of these pages, including both sides of the cover and the flyer have been scanned as JPEG and PDF files and lodged in the National Pipe Archive in Liverpool. P J Davey/21 April 2010

SYSOP Note: I am currently a little confused about where best to put the following examples of 3 digit numbers being used on Both Loewe and Civic pipes, apparently from the era shortly after Civic took over the Loewe operation. They are clearly the same shapes and numbers. These examples are from Yuriy Novikov, who has an extensive collection and interest. Hopefully he can clarify this for us. For now I am putting them here, and will add them to the Civic and Loewe & Co. articles. I am not entirely clear on how these examples affect dating the pipes that used 3 digit shape numbers, and would appreciate help from knowledgeable collectors.