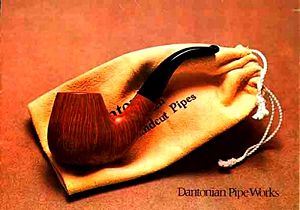 In 1970 Teddy Knudsen had taken leave from Anne Julie tired of making highgrade pipes but being paid as gofer. Sven Knudsen, his elder brother, invited him to join together at Sven's place in Tappernoje on the Island of Fyn, not far from the country village Praestoe. They agreed to work together and started a project they called "Dantonian PipeWorks".

They selected a compilation of pipes and in early 1971 they published the Dantonian PipeWorks Catalog worldwide. In English only, because the brothers orientated to the export markets in Germany, the United States, and particularly in Japan. The pipes were made to order both for customers and retailers.

The catalog portrayed a carefully balanced selection of models. Some Sven had developed and refined earlier when he was at Suhr's Pibemageri and later when working for W.Ø. Larsen and Pibe-Dan. Shapes like the "Walrus" or the "Swan" had already earned him a considerable reputation, and yet others that were newly sketched now. Teddy also added some of his own designs.

The pipes, stamped "Dantonian - Handicraft of Copenhagen", became very popular and a considerable success in sale. But even though Teddy, the "eternal Hippy" as he was characterized once, left after ca. 2½ years in early 1973 to pursue his own way. Sven Knudsen continued to make pipes under the Dantonian name for some years more.

See a complete scan of the Dantonian PipeWorks Catalog on the website of Søren Eric Andersen. Also available here on Pipedia ; File:Dantonoa(SvendTeddyKnudsen).pdf, and the following example pagess, courtesy, Danishpipemakers.com