Ken Erickson, freehand pipemaker from Sunland, California remained almost unknown outside the United States and even there his name is familiar to a small number of insiders only. Quite astonishing, because knowledgeful connoisseurs agree that Erickson was an absolute whiz, whose elegant pipes belong to the best, which were ever made in America. 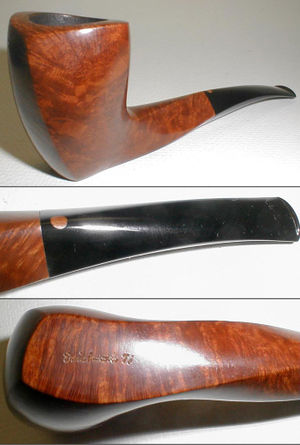 Ken Erickson began to create pipes by the end of the 1960's and died in January of 2003. Posthumously he was honored as "Outstanding American Pipe Maker" at the West Coast Pipe and Cigar Expo in March of 2003.

He started his career in Minnesota, but soon transferred his workshop to Sunland in California. It is reported, that back in the times of the "pipe mailers", when notable pipe dealers in the USA used to instruct their customers by hectographed circulars about new available pipes - among other things - Erickson's pipes sold even faster and at higher prices than those of such icons like Mike Butera or Rick Lewis. Unfortunenately, on the climax of demand for his pipes Erickson, yet at a relatively young age, suffered a heavy heart attack. He abandoned pipemaking instantly. Many years later, appr. since 2000, he returned to his craft and finished some few more pipes from old supplies until his death.

Erickson used no grading. The pipes are engraved with his name (in script) and two digits indicating the year of production.