Although FRIBOURG & TREYER's closed in the 1980s and has been gone for many years, their pipes and related products continue to command the respect of pipe smokers around the globe! 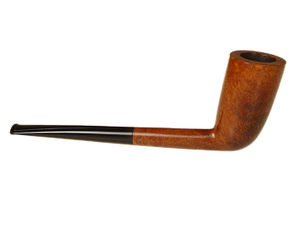 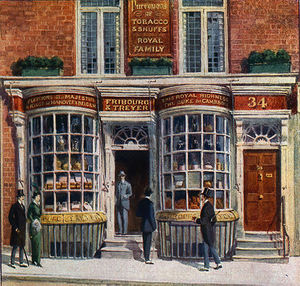 FRIBOURG & TREYER's was one of all LONDON'S GREAT OLD PIPE SHOPS established in 1720! Their primary shop was located in the HAYMARKET DISTRICT of London where they catered to the rich and famous including Royalty for nearly 300 years! While most collectors are familiar with the "Royal Appointment" accorded certain well-established businesses in England (most commonly seen on Dunhill packaging) FRIBOURG & TREYER's not only held an identical appointment by the King of England, but they also had a similar "Royal Appointment" by the King of Belgium! From their well-known Haymarket Shop with its picturesque Bay Windows, the tobacconists blended their own line of tobaccos and snuff (and became known as "Britain's premier snuff chandler")! Like Astleys in London and famous American landmarks like Bertrams and Leonard's, Fribourg & Treyer had their pipes manufactured by various unnamed pipe makers. But because of the quality of their clientele, they demanded and received the very choicest pipes!

The success of Fribourg & Treyer saw them expand to other "upper end" locations and at the height of their success they also operated shops in the equally famous Burlington Arcade as well as at Oxford and Cambridge! In the 1970s they were acquired by Imperial Tobacco and as "urban legend" has it, they could not afford to renew their lease at the Haymarket so they moved to a new location on Regent Street in London. However, that was short-lived and this famous old shop was permanently closed and its snuff and tobacco recipes sold.

Today Fribourg & Treyer is remembered primarily for its' snuff and tobaccos! They supplied tobacco to pipesmokers around the world, and much like Drucquer's in California and Garfinkel's in Washington, D.C., their oldest blends are still vigorously pursued by knowledgeable pipesmokers today whenever they make a rare reappearance on eBay or elsewhere! (However, Fribourg and Treyer snuff and tobacco are still readily available throughout the world made by other tobacconists.)