Jean Gambier was an artist made famous by his clay pipes. Based in Givet, in the Ardenas, the Gambier factory and was founded in 1780. In 1867 it had 660 workers, and at one stage was producing 100,000 pipes per day. 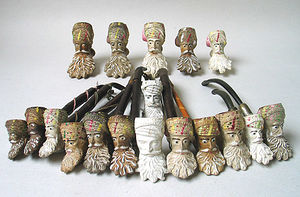 The company began by reproducing long Dutch pipes, but came to fame when in 1817, under the direction of the son's founded, Joseph Gambier, it became the first factory to make bowls depicting personalities of the time. Examples include Victory Hugo, Napoleon, and Gambetta. Its 1894 catalog included over 1600 models, with Jacob being the most popular, endlessly reproduced as the Great Jacob, or the Good Jacob.

Production fell into decline after 1870, and closure followed in 1926. They were succeeded by the Vve. Hasslauer factory.

One of Gamblier's most famous publicists was the French poet, Arthur Rimbaud, who smoked the cheapest pipes on the market.