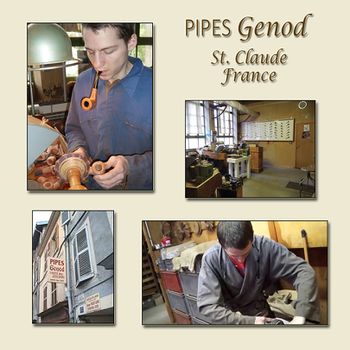 The history of the workshop Genod goes back to the year 1865, when the pipe-pioneer Comoy founded this factory in the heart of Saint-Claude. He united the workshop with David soon afterwards. In 1923 the house Comoy-David is taken over by Georges Vincent who continued the production in the style of Comoy-David. From 1939 Vincent worked together with his son in law John Craen, who became responsible for the technical development in the factory.

In 1959 Jacques Craen entered the scene and as third generation he soon was recognised as a many-sided pipemaker and manufacturer. From the year 1970 onwards Jacky Craen was director of the Société Vincent-Genod and in the same year he introduced the brandname Genod. When Jacky Craen took over the business in 1977 several changes and innovations took place. Craen opened a pipeshop in the centre of Saint-Claude, on the Place de l'Abbaye and also started guided visits to his workshop.

The shop in the centre of the villages functions as advertisement for his pipe brand, but also for the visits to the factory. In this charming and historic workshop time seems not to have ran through and an interesting show round through the factory learns visitors a lot about the techniques of pipemaking and the functioning of a pipe factory in general.

In 2006 the young pipemaker Sebastien Beaud started his work in Jacky's factory. As Craen himself he took over the brand Viou to start with. In future he will take over the business in its entire and continue this sympathetic workshop in its traditional way.

St. Claude, France: 1865. In the very heart of the very town where the briar pipe first came into existence, the venerable Comoy firm set up a workshop and began a process which led to the noble heath becoming the favorite pipe material the world over. The next 95 years saw two changes in ownership; Comoy-David to George Vincent-Genod in 1923, and again in 1959, with the arrival of Jacques Craen. It was in 1970 that 'Jacky' Craen, became the director of the Société Vincent-Genod, and, that same year, created a new line of pipes named "Genod".

In 2006, a young, highly talented pipe maker by the name of Sebastien Beaud began to carve pipes, and was approached in 2011 by Smokingpipes.com's very own Sykes Wilford, with an eye for introducing and promoting a new brand of high quality, well-engineered French pipes to the US market. The agreement resulted in SPC's Sebastien Beo line. The Beo briars weren't merely well received, they have been the constant recipients of highly positive reviews from our collectors. On the rare occasion where a feedback was less than 100%, though, it was generally an expression of a desire for a greater range of shapes and an availability of larger sizes.

Once again, Sebastien Beaud came through, this time in the form of the Genod briar. Proudly bearing many forms which pre-date Dunhill designs by close to half a century, the Genod pipe lays rightful reclaim to what truly constitutes a "traditional" shape, and boasts a breadth of ranges from 'petite' to near-Giant.