The Georg Jensen pipe factory was founded by Per Georg Jensen and his wife in 1954, in Kopenhagen, Denmark. Since the 80s the company is under the management of his daughter Lis, and his son with the same name, Per Georg Jensen. The company manufactured around 2,000 factory pipes per year. Among the top of the line pipes are hand carved special editions and free hands. 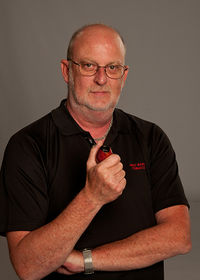 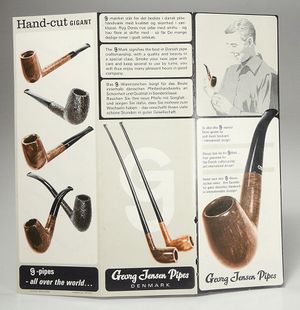 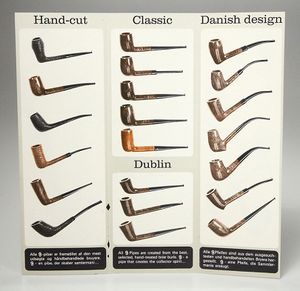 Top of the Line models of Georg Jensen have vulcanite or ebonite stems, factory pipes usually have acrylic stems.

Pipes were commonly marked (in increasing quality) with: MODEL + MODEL NUMBER + "Made in Denmark", GJ stamp in red on the stem. MODEL NUMBER + "Georg Jensen" in italic or fancy font.

Extremely rare and collectible freehands were marked with:

"Straight Grain", and a number that discerns the grading from 1 (lowest) to 13 (highest).

Special edition pipes were marked with: MODEL + MODEL NUMBER + "Handmade in Denmark" + GJ stamp in white on the stem.

The factory closed down in 2001 when Per Georg Jensen (jr) became "Tobacco Professor" for MacBaren Tobacco house.

Example pages from the Full Brochure File:Georg-Jensen.pdf, both courtesy danishpipemakers.com