The pipe making kit was given to him by a fellow member of the University bicycling club as thanks for a small kindness that Gotoh-san had done him. The friend, knowing Gotoh’s longtime love for woodwork and his love of pipe smoking, thought this an appropriate gift. Indeed it was! And what a path it has sent him down. Gotoh finally completed that first pipe some four months after he had begun with the kit, taking the same care with this first pipe that he would with all his future creations. A man of great patience and determination, Gotoh has a very deliberate approach to his work, resulting in a slow meticulous pipe carving process but yielding the most astonishing results. 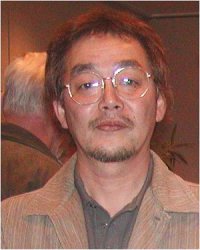 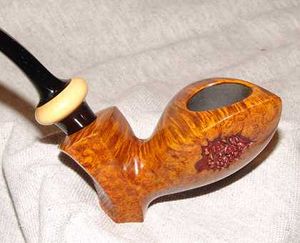 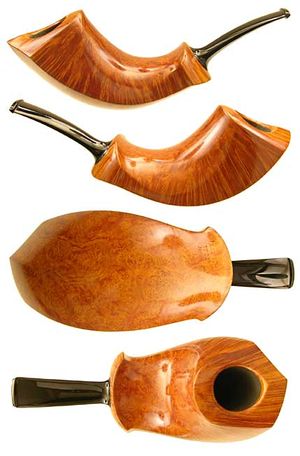 The kit was one that Tsuge has sold in Japan for some decades now: it contained a pre-drilled block of briar with a pre-molded stem, various sand papers and files and a few different stains. So, at twenty, this friend and this kit set Gotoh-san down a path that would define the rest of his life and Tsuge would go on to play an even greater role in the development of this pipe carver. Gotoh continued to make pipes as an amateur for five years, while pursuing other interests. In 1981, he went to work for Tsuge, making the Ikebana line of pipes along with Fukuda-san, who makes all of the Ikebana pipes today. His skills became more and more refined. The exacting engineering standards of Tsuge had a great impact upon the young carver, who immediately recognized the importance of even the smallest engineering detail. He worked at Tsuge for two years making Ikebanas. Incidentally, Smio Satou was at Tsuge at the same time, though he did not work on the Ikebanas at that time. From 1983 to 1987, he worked as a subcontractor for Tsuge, making the Ikebana series pipes from his own workshop. Some of these pipes, in recognition of Gotoh’s extraordinary talents, were stamped both with the standard Tsuge Ikebana stamps and with ‘K. Gotoh’. During this period, because of Tsuge’s focus on replicating the high grade Danish style, Gotoh became imbued with that aesthetic vision. It became the foundation from which he would build, reinterpret and create the most interesting forms.

In 1987 Gotoh moved on to other pursuits. Since then, he has been primarily occupied with making plastic and wood mockups of consumer goods, industrial tools and such. He continued to make about twenty pipes annually through the 1990s, selling them through a small shop in the suburbs of Tokyo.

While the design and mockup work paid the bills, as the decade wore on Gotoh longed to return full time to his first passion: making pipes. Gotoh was rightfully cautious as he began this transition back to pipe making in 2003 and 2004. With a wife and children, the financial concerns necessarily have had to supercede his desire to throw himself headlong into his pipe making again. It was during his return to the pipe making profession that Gotoh sought out fellow pipe maker Hiroyuki Tokutomi.

Gotoh clearly has a great admiration for Tokutomi. Regarding Tokutomi and his relationship, he once remarked: “he taught me everything.” This is high praise indeed, considering the immense artistry of Gotoh. This statement is a testament both to Tokutomi’s brilliance and Gotoh’s modesty.

While Gotoh has much in common with both Tsuge, where he began his career, and Tokutomi, who expanded the horizon of his artistic vision, Gotoh has developed his own unique style. He has a great facility with bamboo and a fantastic eye for natural adornment, using rosewood, boxwood and ivory in a balanced and moderate fashion. There is also the distinct Japanese influence; at times his creations can remind one of the traditional ceremonial Kiseru pipes. Along with a facility with asymmetrical design, these aspects of his pipe making seem to be similar to those of Tokutomi. Gotoh sets himself apart though, in his astonishing ability to carve from briar the illusion of motion.

Kei’ichi Gotoh imbues his creations with a vibrant vitality that makes his work seem alive. Embracing asymmetrical design has allowed him a freedom when seeking to carve the most organic forms. Defiantly bold and ambitious, many of his creations defy belief. His harpooned fish is a fantastic example of his ability to capture movement and action in his sculpture. Gotoh seems to have a remarkable understanding of arcs and curves. His creations will often posses a curvature occurring in two planes. A fish’s tail, for instance, will curve in such a way as to capture the act of swimming. With this end in mind, Gotoh uses the grain of briar to great effect, the grain complimenting the curve, giving the subtle arc even more vitality.

Gotoh is a truly gifted pipe maker. Interested deeply in both the mechanics and engineering of his pipes and their aesthetics, his pipes demonstrate brilliance in both realms. Whether it is an interesting new means of arranging a tenon/mortise to make a particularly unusual form possible, or the graceful brilliance of many of his shapes, Gotoh is unquestionably a master of his art and craft. The pipe community should be excited about this carver. We are fortunate that after so many years he has returned to his proper calling. Courtesy of smokingpipes.com