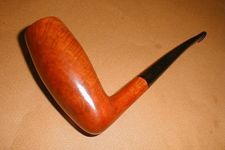 H. Dan-Christensen's shop Pipe-Dan at Vestergade 13 - just off Copenhagen's Town Hall Square - was one of the most important turntables for upcoming as well as established pipemakers and pipe enthusiasts from all over the world from the 1960's to the 1980's.

P. Holtorp was one of the many artisanal carvers who worked in the periphery of Pipe-Dan. In the 1960's - maybe up to the early 1970's - he was one of the in-house pipemakers working together with Sven Knudsen, Gert Holbek, Axel Svend Celius, Tom Eltang - just to name a few. Later he worked from his own shop but still sold most of his pipes via Pipe-Dan.

Holtorp never became as famous as some of the names mentioned. Most probably, because the majority of his pipes was a bit different from the Danish "fancy freehands" and more striving for elegance. The typical Holtorp features bold lines and forms. Some are very manly pipes, so to say, rather made for stronger built pipesters. Accordingly the weight tended to be considerable - e.g. 118g the pipe shown below. Many were versions of earlier Holbek or Pipe-Dan designs. His "Bird" shape pipes for Pipe-Dan are clean simple shapes that have become Danish classics.

Holtorp's craftsmanship and execution match very high standards. Straight grains from his hands are more than a rarity but the dense and flawless graining of his pipes is remarkable.

Estates by Holtorp don't ask the prices of some other contemporaneous Danes by far - Thus an excellent buy for those who love a quality pipe if they can find them.