In Pipestone. A puzzling pipe of improvisational ingenuity

From Pipedia
Revision as of 18:55, 23 April 2021 by Sethile (talk | contribs) (Created page with "<center>'''In Pipestone. A puzzling pipe of improvisational ingenuity'''<br> '''Ben Rapaport'''</center> <blockquote> ''On the Mountains of the Prairie,''<br> ''On the great...")
(diff) ← Older revision | Latest revision (diff) | Newer revision → (diff)
Jump to navigation Jump to search
In Pipestone. A puzzling pipe of improvisational ingenuity
Ben Rapaport

On the Mountains of the Prairie,
On the great Red Pipe-stone Quarry,
Gitche Manito, the mighty,
He the Master of Life, descending… 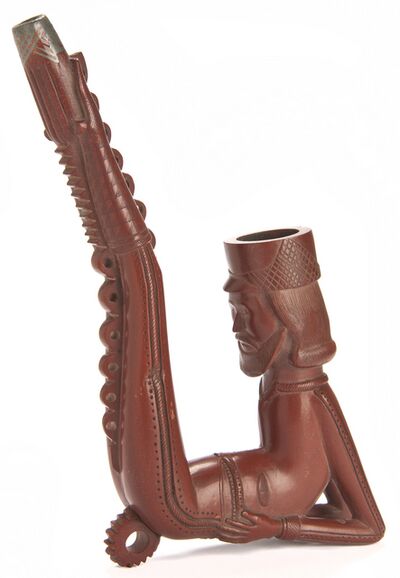 Stone pipes have always been associated with the prehistoric peoples of North America. Specimens from as far back as 2,000 years ago have been encountered throughout the United States in argillite, pipestone, sandstone, soapstone and steatite. Pipestone is a hard, fine-grained, red clay, a type of argillite that ranges in color from mottled pink to brick red, and to rarer colors, such as mottled yellow, green, blue, brown, gray and black (steatite). And it is soft enough to file down with flint tools. It’s extremely durable, withstands intense heat, and doesn’t crack in the sunlight, so it can last for generations. Pipestone quarries are located in the birthplace of Spam—Minnesota—at Pipestone National Monument and at the Pipestone River in Ontario, Canada; Native Americans have used the Minnesota pipestone quarry for more than 3,000 years. “… pipestone tobacco pipes were carved and polished in a highly sophisticated manner and in a bewildering variety of different styles and shapes by a succession of peoples of North America for many centuries before Columbus… (W. F. Axton, Tobacco and Kentucky, 1975, 19). Once called fire clay, most now call the stone Catlinite, a term that came into use after the American painter George Catlin visited the quarries in 1835, but it was Philander Prescott who supposedly was the first white man to visit them in 1830 and wrote about the rock, noting that evidence indicated that American Indians had been using the quarries since at least as far back as 1637. “‘Catlin claims to be the first man that visited the pipe-stone, but this is not so. In 1830, I found a 6 lb. cannon-ball there’ wrote Philander Prescott in his journal” (Darrell Ehrlick, It Happened in Minnesota, 2008, 14). Catlin wrote about how Native Americans used simple knives to shape the stone into a pipe bowl. To create the bowl depression, one person applied a sharp stick where he wanted to drill the bow and rotated the stick between his hands while sand and water were applied to the stone.

Pipestone is not just geologically unique. It plays an important role in Native American mythology and legend. (Read Theodore L. Nydahl, “The Pipestone Quarry and the Indians,” Minnesota History, Vol. 31, No. 4, December 1950, at collections.mnhs.org). In theory, only people of native ancestry, e.g., the Dakota Sioux, the Lakota, and the Ojibwa, have the right to carve pipestone which is made into, among other distinctive things, ceremonial, elbow, disc, platform, “T-shape,” and effigy pipes and bowls. Smoking a pipestone pipe was intended to honor The Great Spirit. Today, on North Hiawatha Avenue, Pipestone, a giant peace pipe sculpture presides in front of the workshop of the Keepers of the Sacred Tradition of Pipe Makers who are charged to protect and educate the public about the nearby pipestone quarries.

I found a rather interesting and perplexing Pipestone pipe on the website of the Minnesota Historical Society, St. Paul, as described by Axton. It’s not a peace pipe, it’s not a ceremonial pipe, and there are several different interpretations as to the maker, its age, and what it represents. The Historical Society catalog description is “Indian: Ceremonial Artifacts. Smoking Equipment. A Pipestone (catlinite) pipe carved in the form of a white man in 1840s attire resting on his arms and lower back, with his legs raised. The toes point toward the reeded mouthpiece with a poured lead decoration at its top. The legs form the pipe’s stem; the upper torso, head and hat form the bowl. The overall size is 7” in height, 9–3/8” in length. The carved details are finely incised. The pipe was probably made by or for David Faribault, Sr. and given by his son, David Faribault, Jr. to Reverend Moses N. Adams, an Indian Agent in Flandreau, South Dakota, in the 1870s.” Faribault Sr. was a mixed-race Indian scout who was supposed to be a participant in General Sibley’s expedition against the Sioux in 1862. The catalog also states: “Creation: Approximately 1840–1849.”

Made in the 1840s by an unknown carver, it was gifted in the 1870s, but no specifics other than “from of a white man.” Is this an accurate provenance and attribution? Careful analysis offers many potential explanations. The craftsmanship and attention to detail suggest someone highly trained in working this hard red clay, perhaps a First American from either the Pipestone region or from the Dakota Territory. Many Minnesota volunteer units participated in the Civil War, and the Territory contributed one battalion to the war effort. Civil War veterans settled in Pipestone, Minnesota, as early as 1873 and, in 1886, The Southwestern Minnesota Grand Army of the Republic selected Pipestone for an annual encampment at what is now the Pipestone National Monument that they called Camp Fremont. (Annually in August, the city celebrates “Pipestone Civil War Days.”) On close inspection, the apparel predates Civil War uniforms, so it’s unlikely that this pipe was meant to memorialize the service of these soldiers or to commemorate the end of this war. However, no Civil War-carved pipes in this medium have ever been encountered, and the short-brimmed forage cap—or officer’s kepi or slouch hat—the piped jacket and pants and the fitted boots suggest pre-Civil War apparel.

Is there another explanation? It’s possible that a member of the Yankton (or Flandreau) Sioux of South Dakota may have crafted it during or after another civil war, the Dakota War of 1862, also known as the Sioux or Dakota Uprising. Then there is another possible, but unlikely, explanation for this pipe. In the late 1850s, a nascent Minnesota entrepreneur, James Boyd Hubbell, started his own company, Hubbell and [Alpheus F.] Hawley, also identified as the Northwestern Fur Company. It quarried large quantities of pipestone, and had the mineral fashioned into thousands of pipes they planned to sell to the military for use in trade. The company had a brisk business in white-made Catlinite pipes. The contract fell through, but Hubbell recouped his investment by trading the pipes for buffalo robes with Native Americans along the Missouri River. “At a meeting of the American Philosophical Society in 1866 [Dr. F.V.] Hayden stated that in the two years just passed the Northwestern Fur Co. had manufactured nearly 2,000 [Catlinite] pipes and traded them with the tribes of the upper Missouri” (“XXIV. The Red Pipestone Quarry,” in W. H. Holmes, Handbook of American Antiquities, Part I, Introductory, The Lithic Industries, 1919, 263). But this is not a run-of-the-mill, mass-market pipe; and the Museum claims that it was produced in the 1840s, much before Hubbell and Hawley were in business.

As my interest in this pipe increased, I discovered Jeffrey P. Tordoff’s essay, “Conundrum in Catlinite. Exploring the History of a Masterpiece” (Minnesota History, Vol. 51, No. 8, Winter 1989; the pipe is on the cover in full color). Tordoff details this pipe’s history and his analysis is in granular and excruciating detail, only some of which is quoted here:

This type of inlaid decoration, the treatment along the front and back of the legs, and the use of catlinite are the only attributes that suggest manufacture by an American Indian. The figure is apparently that of a white man, wearing a white man's clothing, beard, and hair. It is one of the most detailed examples of catlinite sculpture known today, and the detailing serves to emphasize the enigmatic aspects of the pipe as a cultural artifact, made by an artist equally at home with Indian and white idioms. The fact that it is signed also suggests a considerable degree of acculturation toward Euro-American forms, assuming the artist to be, in part at least, of Indian descent. The decoration of the outseams of the figure’s jacket and, particularly, the trousers suggests to some that the carved garments were meant to be buckskin. These seams look as though they might imitate the punched-and-laced technique sometimes used with that material. On the other hand, this decoration may have been purely ornamental, a stylized representation of header quillwork. Other features also point toward cloth construction, including the short self-belt below the rear waist of the trousers and the cuffs and pocket flaps of the jacket which look knitted. That the garments are of Euro-American cut, though, is beyond question … Also non-Indian in style are the cap and boots. The former has the short, downward-pointing visor common to U.S. military headgear between 1821 and 1851 and what looks like a knit cuff and earflap arrangement. The boots have distinct, separately applied soles and elevated heels. The uppers are incised with a pattern of alternating shaded and plain triangles and—their only gesture to life on the frontier—a fletched arrow on the front of each, point downward … The figure is one of a dandy. The boots are fancy ones—‘loud’ boots, if you will, of a type sported until about midcentury, perhaps even in Morocco leather of the very shade of the stone from which the pipe was made … I believe that this pipe dates to the 1840s, not to 1873. It could easily have been made for David Faribault, Sr., and could also have been made by him.

Although the pipe has no signature, when I queried, a Museum staff member responded: “This is one of the most elaborate and finely-detailed pieces of catlinite sculpture in existence. Labels/Marks: initials ‘D.F.’ in catlinite, outlined in poured lead.” (D.F., David Fairbault.)

Say the word pipe or tobacco pipe and it means different things to different people; without further explanation, it can refer to any medium, any construct, any country, any age. So what does this pipe depict? Tordoff’s dandy? A U.S. Army Indian scout? Someone else? Could it be an idol pipe? Human figures on an idol pipe typically portray culture heroes or god-like beings. Often, an idol pipe is meant to represent the smoker himself making a religious offering of tobacco smoke, and normally looking upward; this figure is not looking upward.

With so much doubt, so much conjecture, this pipe is a puzzle, at least to me. What cannot be refuted is that it a rather unconventional, distinctive pipe, not one for puffing, but one created to memorialize an event or to honor an individual. Is this important for a pipe historian, a pipe collector, or an inquisitive pipe smoker? Probably not, but it is, unquestionably, quite the conversation piece.