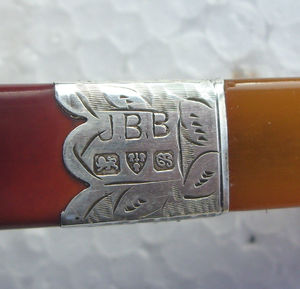 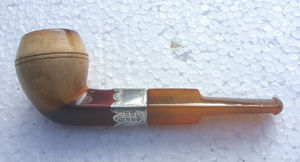 J.B.B. are the initials found on pipes manufactured and distributed by Joseph B. Brown of Kingston upon Hull, England from the early 1870s until sometime in the 1920s. Hull is located in East Yorkshire. Brown billed his company as a "Hull Importer of Tobacconists Goods," and apparently produced various lines of meerschaum and briar pipes as well as cherroot and cigar holders. His business was located on Brook Street.

Joseph Brown was born in Ashbourne, Derbyshire about 1844. His early years were spent as a traveller (i.e. salesman) in the jewelry trade. By 1871 he had moved to the Hull area in Yorkshire, and on February 17, 1875 he married there. His wife was named Alice Fourster (this spelling is almost certainly a transcription error), who was born in Newcastle, Northumberland about 1850.

By 1876 Joseph was associated with the pipe trade; in that year he received a patent for "mounts for tobacco pipes". In subsequent censuses he is clearly identified as an importer of fancy goods. For many years the business was located at 41 Brook Street in Hull, while the family maintained a residence some 18 miles away in Withernsea.

Joseph and Alice had four children: Joseph (b. 1881), Walter H. (b. 1882), Rachel (b. 1884), and James (b. 1887). Of the boys, at least Joseph and James were involved in their father's business. Joseph lived until at least 1911, and the business was in existence at least as late as 1922. The directory in the latter year fails to show Alice or two Josephs, lending some credence to an assumption that the eldest son had by that time taken over operations.

J.B.B. creations often have silver banding as part of their design. In the Hull region, all silver was assayed and hallmarked by the Chester Assay Office, a city located in Cheshire, England. Hallmarks from at least one other assay office (Birmingham), however, are know to be in existence. A well established dating schema exists for these offices, and makes it possible for the collector to accurately date the production of J.B.B. sterling outfitted tobacciana.