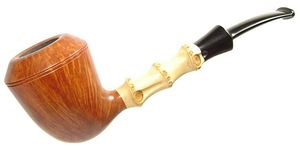 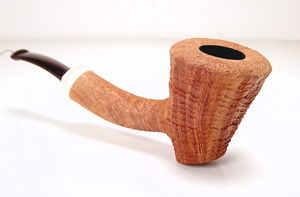 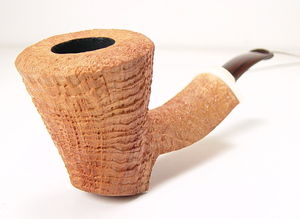 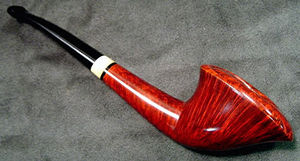 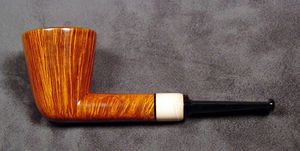 As of the Spring of 2014, Jody Davis pipes are pretty hard to come by. Jody moved back to Nashville, TN, and has returned to touring with the Newsboys, a popular Christian Rock group. As a result, he makes very few pipes these days, and they do not hit the estate market very often as collectors tend to hang on to them.

An article by Keith Moore, This article is dated now, but remains an excellent introduction to Jody and his work --sethile (talk) 13:20, 14 June 2014 (UTC)

Ten miles south of Yuma Arizona, the Gila Mountains cast shadows west across the Sanoran desert. The sunrise splashes vibrant colors of red, orange and gold over the arroyos and gradual sandy slopes. In the middle of this beauty sits a workshop; a pipe makers workshop.

With coffee and smoke he starts his day, sketching the designs that fill his mind. A mind not yet cluttered by the concerns of the day. A mind free to create. Producing the basic ideas that he will nurture into the finest smoking pipes he can possibly produce. A fine balance between the technical and the aesthetic , the classic as well as the romantic form. Pipes possessing quality...and collect ability.

I met Jody in 1994 at a smoke shop in Nashville, TN. Where I sold him his first pipe, a Peterson Canadian. We soon became good friends and he became a pipe enthusiast...He was a musician and played in a fairly popular band (with four gold records and three Grammy nominations) that toured the world, which made his appearances in the pipe shop few and far between.

One morning, not too early, he climbed the stairs to the small office that I occupied as "Pipe Buyer" and handed me a pipe. It was interesting. Obviously a homemade piece. I asked him where he got it and he said he had made it. I took a closer look and noticed that it wasn't half bad. The briar itself was horrible, no grain hardly, but the design was telling. It showed incredible potential. I realized then that Jody liked to make things. He liked to create. His passion for music was now spilling over into this new art form. I introduced him to Danish pipe legend Jess Chonowitsch. Jess helped him to obtain much better materials, and Jody became intensely focused on his new craft. That was seven years ago.

Recently Jody has asked me to help him in his next phase of pipe making. He has retired from the music business to pursue the passion and "quality of life" of a full time pipe maker. I never knew that this passion for making pipes would one day turn into a career, but thankfully for all pipe smokers, it has.

My name is Keith Moore. I have been typing this from 32,000 feet above the West Texas desert, heading for Yuma Arizona. Jody and his family have recently re-located to this beautiful world of cactus and pinion. His wife is from the area and they have settled in for a new life. saying is true.

I am going to interview Jody and let him tell you about this intense focus he has for making the most beautiful and functional pipes he can. I am not just doing this because Jody is my friend. I am also doing this because Jody makes pipes that in my opinion rival the greatest pipe makers in the world. I could go on and on, but you would think I was being bias. You will just have to smoke one for yourself to see what I am

Jody was waiting for me in the baggage claim. We drove in his pick-up out into the desert. The Arizona desert is awe inspiring. It was close to sundown when we made the drive and the colors that played upon the citrus groves and foothills were beautiful. We pulled into a driveway, past a low adobe wall and I asked what we were doing.

Lighting his pipe, Jody said "this is where I live." I blinked a few times and exclaimed, "you live in the Alamo?!" His house looks like an ancient Spanish fort or monastery. I'm not kidding. I expected Catholic monks to come and greet me with wine and vows of silence. We walked around to the side of the "Alamo" to what looked like a smaller version of it, and he said "we're here." "Here" meaning the pipe workshop. I took off my cowboy hat as we entered. I felt like I was either entering a shrine or a small chapel. In the middle of this large room is a pool table. I felt comfortable putting my hat back on. Jody offered me a drink and we played a game of eight ball. I won't tell you who won. After he showed me the rest of the shop we sat down for the interview...

As I packed 965 into my J. Davis Bamboo Friar I asked Jody what first got him interested in pipes... I became interested in smoking pipes about ten years ago. I'm not sure why. My grandfather smoked a pipe, as well as my father, for a short time. Maybe it was a teacher and friend in high school named Vance Hayes. Vance was a pipe smoker and was very influential in directing me in my early interest in music, which lead to a fifteen year career, from which I am now retired.

It's hard to say what sparked my interest, but once it started, I became fascinated with the pipes themselves. I bought my first pipe from you (Keith), of course, and started collecting new and estate pipes. I began learning everything about them I could, spending many hours at the feet of "estate pipe guru" Greg Peavy at the Arcade Smoke Shop in Nashville. I became captivated by the shapes, the grain in the wood and the harmony that could be achieved by artisans and craftsmen and sometimes even factories.

Soon I wanted to try and make one myself. Like so many before me, I found a pre-drilled briar block with a pre-molded stem, at the Three Ten Tobacco shop in Murfreesboro TN, and went to work straight away.

I enjoyed it so much that I started selling off some of my collection of estate pipes to buy tools and pipe making kits from Pimo Pipe Craft. I would either smoke the pipes or give them away to friends. Then you connected me with a legendary Danish pipe maker who offered great advice and helped me obtain better raw materials. It wasn't long before people wanted to start buying my pipes. Over the next year I worked on pipes in my spare time to be displayed at the first Nashville pipe show. During the show, at the table next to mine, was the famed American carver Jim Cooke a.k.a. J.T. Cooke. We introduced ourselves and within a short time, we were feverishly discussing pipe form and functionality, carving and finishing techniques and many other things pipe related.

Before it was over, in response to my makeshift and unorthodox techniques, Jim said "You might as well chew the pipes out of the wood!" He then offered to let me come and spend some time with him in his shop.

A few months later I was on a plane to Vermont. What I learned over that next week changed everything for me. I returned to Nashville, re-tooled my shop, and began honing my skills with an even more intense determination and confidence that I was moving in the right direction.

The results were immediate. I began to set concrete standards for form, quality and technical concept. I learned the importance of a solid foundation in the classic shapes. Jim would say "If you can't make a billiard well, you can't make anything well." From the "Danes" I learned the importance of using only the finest materials, and to set very high standards for my work. They also showed me the subtle (and not so subtle) nuances of shape, and encouraged me to find my own voice as a pipe maker. I never want be complacent as a pipe maker. I believe I will always be working to become better, and I think it shows in my work over the years. I'm looking forward to working much closer with my customers to produce an ever improving product.

When Jody finished answering my question he suggested we go for a walk in the desert before we eat dinner with his wife Erika and their daughter Bethany. The moon was full and the desert seemed even more beautiful in its silver light. The rest of the interview could wait till morning. We heard coyotes yipping in the distance. This is a great place to make pipes I said. He agreed.