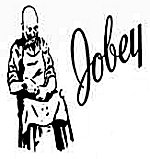 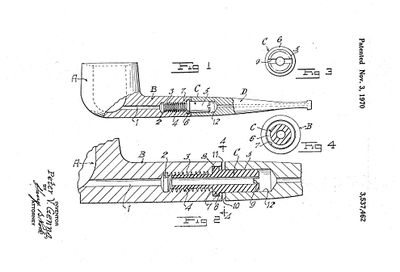 Probably established in England around 1920(?) the brand hiked into the USA later. In the course of time owner, distributor and manufacturer changed repeatedly. As far as is known the following companies have been involved with the brand:

Throughout decades Jobey pipes were mainly sold in the USA, Canada and England but remained almost unknown in continental Europe. The bulk of Jobeys was predominantly made according to classical patterns and mainly in the lower to middle price range. The predominant judgment of the pipe smokers reads: "A well made pipe for the price." So there is hardly anything very special or exciting about Jobey pipes although a flyer from ca. 1970 assures: "The briar root Jobey insists upon for its peer of pipes is left untouched to grow, harden and sweeten for 100 years. [...] Jobey uses only the heart of this century old briar and only one out of 500 bowls turned measures up to the rigid Jobey specifications." 99.80% of cull... that makes the layman marveling!

Yet then there are partially really exciting Freehands mainly in the seventies, that Jobey - Weber owned back then - bought from Danish pipe genius Karl Erik (Ottendahl). These pipes were offered as Jobey Dansk - '70's pure! (BTW waning sales caused Ottendahl to discontinue exports to the United States in 1987.)

In the very same year - obviously only as a ghost brand - Jobey was transferred to Saint-Claude, France to be manufactured by Butz-Choquin.

There must have been an abandonment of the fabrication, because in 2002 the message was spread, the current proprietor of the brand F&K Cigar Co. from St. Louis, MO had recently re-introduced the Jobey very successfully again...

As is noted above, the origins of this company seem to be shrouded in mystery, and most people claim that the origins were in England, followed by American production, and then a later move to St. Claude. There is another possible origin for the company, however, and it would suggest that Jobey was in Brooklyn, New York long before the 1969 patent of the Jobey "link".

There’s not a lot of chatter about it, but if you can lay your hands on a copy of “The Tobacco World”, Volume 61, from 1941, there is a brief mention that reads “Norwalk Pipe Expands” and in the body states that Norwalk Pipe Corporation, “manufacturers of Jobey and Shellmoor pipes”, is moving to larger offices at 218 East Twenty-Sixth Street, NYC, as announced by Louis Jobey, president of that company. Norwalk is listed as one of the alternate distributors for Jobey on this page but apparently Louis Jobey was also actually working there at the time.

Before that, the first mention of Jobey seems to be back in 1915, when two brothers named Ulysses and Louis Jobey of Brooklyn, New York obtained a patent for an odd sort of cavalierish pipe in 1915, here’s the link: http://www.google.com/patents/USD46998

But less than four years later, in 1918, there’s a notice in the Brooklyn Daily Eagle on November 6th to the effect that Louis Jobey declared bankruptcy in the District Court, with final hearing scheduled for December 1918. And in an even sadder turn, that same month sees a funeral notice for Lorraine Jobey, the daughter of Mr. and Mrs. Louis Jobey, formerly of Brooklyn but now living in Moline Illinois at the home of Mr. and Mrs. George E. Hutchinson. The little girl evidently died in a fall.

There's little else on Ulysses Jobey except that he evidently had a “junior” after his name or a son by the same name. Because Ulysses Jobey, Jr. was listed as the vice president in New Jersey of Lakewood Pipe Company Inc., a maker of smoker’s articles, in the 1922 New York Co-partnership and Corporation Directory for Brooklyn. Given the timing it's likely this was the brother.

So while it it speculative, one possible origin story for Jobey is that the company was started by two brothers in Brooklyn in the teens with a new idea for a pipe, and failed amidst terrible tragedy. One brother went to one company and another to the other, but it was Louis who continued making Jobey pipes through the 40s under that name, despite evidently no longer owning the company. It would appear to be the Norwalk Company that was bought out by Wally Frank in the pre-link days. This would suggest that Jobey was always American.

Visit F&K Cigar Co. for an overview of the current offer!