Otello Lorenzetti, the founder of our manufacture, was born in Castelnuovo, Recanati in 1911. He is the fifth of five children from a modest, but enterprising family, in fact they own a tavern where the young Otello, already at the age of seven, actively collaborates. He goes on his own, with a small handcart, to S. Agostino di Recanati where he purchases fizzy drinks and other soft drinks and then resells them with his mother in their small family run tavern. 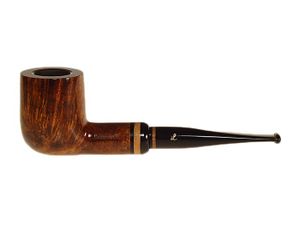 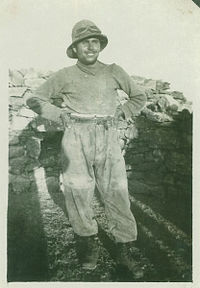 Otello Lorezetti During African War, from the Lorenzetti Pipe website

Like many boys at his age, in the era in which we find ourselves, have to sacrifice their studies to work, his studies, in fact, terminated at an elementary level. Otello however cultivates one of his great passions and, at the age of 12, he begins to attend the School of Singing "Cantorum" at the Cathedral of Recanati, under the guidance of Maestro Don Giuseppe Guzzini. In the choir, as tenor, he remains until the age of seventy. This represents an important part of his life because this is where he meets and personally gets to know the great tenor Beniamino Gigli. 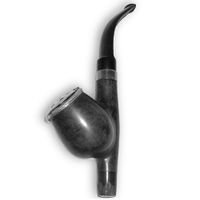 After the precocious interruption of his studies he begins to work as an employee at "Catena Remigio" an old pipe manufacture in Recanati. The grand personality of Otello, who is inclined to make any art a passion, does not delay in emerging. In 1934, after having concluded 18 months of military service in Cividale, in Friuli Venezia Giulia, he decides to work on his own pondering the first bases of the actual pipe manufacture, that, in this period, operates under the company name "Otello Lorenzetti." At that time the capital of our actual company, that was and still is his house, was constituted by: "A few rented tools and my own hands" - as Otello himself tells us. The production consists of 20-30 pipes per day. Every morning, in company of his bicycle, he tries to sell them to the tobacco shops in the area or as he says the "neighbouring shops". With only the strength of his legs he goes to Macerata, San Severino and Civitanova Marche. His pipes are appreciated, so much so that he decides to work more than 12 hours a day to be able to increase the production. This does not constitute a sacrifice for him as his neighbours remember hearing him tirelessly working and singing everyday. 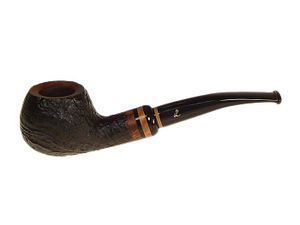 Two brisk interruptions mark the history of our pipe manufacture: the first was in 1935 -in the summer of this year Otello was enrolled in the army and then left for "the African Campaign" from which he returned in January of 1937; the second was in October of 1940, other long months spent in the service of the Italian Army after which he returned home in 1943 the year of Armistice. In 1940 Otello got married to Marinella who became, other than his wife, a great and indispensable business collaborator.

In 1947 Otello succeeded in building, alone, machines the same as the ones he used to rent up until that moment. Many of the pieces most difficult to mould by hand were designed by him and were made in a craftsman workshop in Civitanova Marche. Production increased and permitted Otello and Marinella to buy a "Vespa" helping them to, a part from the province of Macerata, also reach Abruzzo in order to successfully sell their pipes.

The Sixties-Seventies bring on the beginning of exportation abroad (Europe, Africa, America). The company begins to expand, now a part from Marinella, with the help of their children Luciano, Gabriella, Alessandro and some employees. The production begins to perfect itself to the point of being appreciated in almost all the world and by one of the biggest and most famous pipe collectors of all times: our ex-president of the Republic Sandro Pertini.