Difference between revisions of "Lorenzo"

Following Rossi (1886 in Barasso) and Ceresa (1897 in Cassano Magnano) the third pipe manufacture in the Lombardian province of Varese was established in 1900 in the picturesque city of Gallarate by two brothers. Fratelli Lana (Lana Bros.) produced briar pipes for the Italian market under their own brand name. 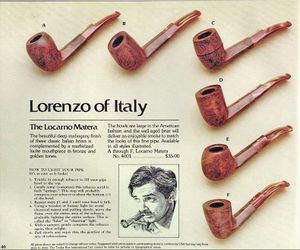 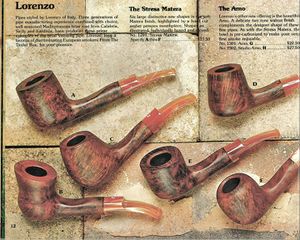 In 1922 Fratelli Lana went into a close co-operation with the merchant’s family Tagliabue from Milano. Sales outside of Italy began immediately and the demand throughout Europe steadily increased. By 1939 the manufacture had grown to factory size with 120 persons employed - a considerable number for the time. The program remained unchanged for decades: cheap, unpretentious budget pipes for the mass markets. Most of them didn’t even have any stampings besides “Genuine Bruyere” or similar. A large share of the production emerged as fabrications for other firms so that an own style of the Lana pipes was hardly recognizable.

After WW II the world of the briar pipe wasn’t the same anymore and especially Italian firms suffered from the ravages. In 1946 Tagliabue took over Fratelli Lana and changed the name to Manufattura di Pipe Tagliabue. Shortly before 1950 Lorenzo Tagliabue became in charge of the company’s management. He had closely studied the first successful steps of the newly established Italian brands like Castello and Brebbia and began to design new models of his own in an unmistakable style. Simultaneously the previous segment of the cheap, cheaper, cheapest bulk pipes was left and pipes reflecting to more elevated standards were produced.

From 1969 on Lorenzo Tagliabue changed the brand’s name to Lorenzo Pipes. The reason currently qouted is another pipemaking firm named Tagliabue.

The newly issued Lorenzos mostly showed extremely strong forms in designs appealing greatly and massively. Thick, “beefy” walls of the bowls and broad and strong stems were significant for them. As contemporary ads said, these pipes were "Made for real men with strong hands". Many had a flattened bottom to sit on the table. Next to the unusual shapes, the patina effect of the silk mat surface combined with a bold red or a bright orange staining gave the pipes their distinctive look. The most successful model was a big Ohm Paul that was executed in numerous variations.

Lorenzo Pipes became cult troughout the 1970s and 1980s. In order to strive another cliche than the gentleman with the stronger statue: the pipesmoking university student of these years, clothed in turtleneck pullover and NATO-parka, can actually not be conceived without a Lorenzo! Well, to be sure he had to select his Lorenzo very carefully from the show-cases in order to find one with less than six blinking fills. Lorenzo dealt very generously with putty. All the same, the pipes smoked very good-natured, they were considered to be hypermodern and flamboyant and, perhaps best of all, they gave you the indispensable highbrow touch!

In 1983 Lorenzo Tagliabue came to bitter grief: his little daughter, the only child, died of cancer. He lost all interest in the business and retired still in 1983, leaving no heirs who wished to continue the business. Lorenzo Pipes was licensed for and continued for a shorther period by Comoy’s of London (Cadogan / Oppenheimer Group). Then Lorenzo Pipes almost disappeared and Lorenzo Tagliabue passed away in 1987.

But this wasn't the end. In 1988 Riccardo Aliverti and his wife Gabriella purchased all rights to the Lorenzo trademark from the Tagliabue family and production of the renown Lorenzo Pipes resumed.

The Aliverti family is involved in pipemaking since Romolo Aliverti, the father of the current owners, joined the Lana Brothers in 1920. He later reached the rank of technical director. No wonder that his son Riccardo showed an interest in pipe making. Riccardo began learning the pipemaking trade in 1954 at the age of fourteen under his father's watchful eyes and succeeded him as technical director upon his father's retirement in 1973.

Today the third generation of the Aliverti family is working for the company. Massimo Aliverti, Riccardo's son, has been with the company as sales director since 1991. He works closely with his father and knows all phases of production. Massimo has established a broad customer base for Lorenzo around the world.

As far as the informations are reliable, Lorenzo's better lines (One Star, Two Star, Three Star, Moscato, Spumante and the Grand Canadian) are made in Italy while the cheaper ones (New Era - Riesling, New Era - Poggio, Angera, Angera Satinato, Cadry, Churchwarden, Filtro, Arena, Cadore, Sport PS and Garden) are made in Albania by Tomori to benefit from the rich deposit of briar in Albania.