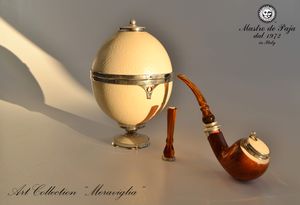 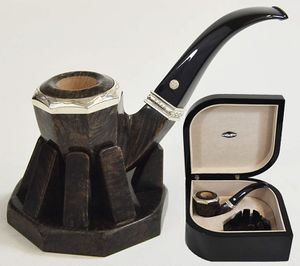 He lived in pesaro where he was also born, he is an accountant and he worked from 1978 to 1983 in a small company owned by his uncle, the company was just born and had a staff of five workers while he was the only employee, an handyman. when he left the job the company had thirty-five workers and five employees, in addition to him which was theirs manager. He was contacted by the surveyor Terenzio Cecchini at the time the only owner of the Mastro, to take care of it in every aspect, first as an employee, then as an administrator and later as a partner of Mastro de Paja and afterwards with the passing of Mr. Cecchini he became the sole owner.

His first attempt was to reduce production to the benefit of quality and the care of each piece, then the decrease of sales points in Italy while at the same time looking for alternative markets. today, unlike the past, almost all of the production is destined for the foreign market and its few examples are present in over 40 countries in the world, making its contribution to the made in Italy. Currently the Mastro produces about 2 thousand pipes a year with strictly artisan procedure, at the Mastro currently reigns a warm harmony, is a group of friends who strives to get the best. This also stems from the fact that pipes for Mastro de paja are not to be considered as any other object to be produced and sold following cold strategies common to everyone in the business world, it’s completely different, it is necessary to love it, it is a style of being, a philosophy of life that can only be appreciated by a noble soul and not noble by title but by principles.

Mastro de Paja "ELITE COLLECTION" It is the production of pipes made entirely by hand, even they are unique but of regular production On all "Mastro de Paja" pipes you can see fire stamped all the informations for tracing the value of each creation.