Micoli or "Mic" as he is called by family and friends, has acquired the reputation of being one of the best American pipe makers. He is appreciated by the most prominent of collectors. Educated in the arts, He started this adventure in 1968. His craftsmanship and artistry were dedicated to over twenty years of full time pipe making, with no two alike. In the last twenty years plus he has been partially retired and limits carving to a few pipes a month. ​He has continued sculpting animals and other subjects from brair and other rare woods. Micoli is now 72 years old.​

The signature of Burns' work is the specific way of rustication he worked out using a Dremel power tool. (The Dremel had been introduced to pipemaking by Teddy Knudsen.) 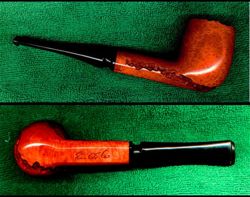