Difference between revisions of "Mr. Groum" 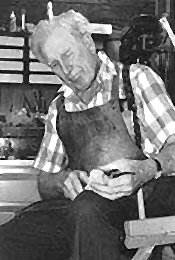 Mr. Groum Pipes were made by pipe artisan James H. Margroom, who lived in Hanover, Pennsylvania. He passed away 7/8/2001.

"Today, a visit to a pipemaker's shop could be a disappointing experience. The traditional hand-carving one would expect to see while a block of briarwood is transformed into a beautiful pipe is mostly a thing of the past. However, in my Hanover, Pennsylvania, workshop, I have tried to remain true to tradition for more than 30 years. I have gained a solid reputation for my carving of unique, often whimsical and, sometimes, exotic pipes all of which bear my trademark, "Mr. Groum". Some samples of my work are pictured on this page and another reached through the link below."

"My carvings have won recognition from Pipe Collectors International, including an award for my apple-shaped pipes one of which is shown below. Now that I'm 78, I work only when I feel inspired and although some of my creations might not appeal to some traditionalists or purists, all of my pipes are made from blocks of fine imported briar and are designed to be smoked. I sell my pipes at leading craft shows in Pennsylvania and Maryland and from my shop to pipe enthusiasts around the world. My work generally retails for $60 to $100 for simple carvings; more exotic pieces are priced from $150."

"Every pipe smoker wants that special pipe, but does not know how to go about getting it. Today getting that rare pipe is easier than ever, all it requires is creativity, patience and Mr. Groum. Mr. Groum has been making pipe shapes like no other for more than thirty years. While he does make classical shapes, he is best know for making more exotic shapes like the Apple Pipe which is his Signature Pipe. He is gifted by being able to produce just about any shape imaginable from Hammers to Mac Trucks. He has produced more than 7000 pipes over the years and now only makes pipes for pleasure and self satisfaction."

"Mr. Groum has won many awards for his pipe carving talent, for example he has received awards from Pipe Collectors International for Best Carver and The Most Unique Carving. He has been feature in magazines like Pipes and Tobacco Magazine and Wood Carving Illustrated."