Pipa Croci pipes are created by Paolo & Gianni Croci from Mantova, Lombardia. The company was founded in 1983 and on each pipe you will find the nomenclature reads "dal 1983". Each and every pipe is hand crafted from aged Italian Plateau Briar. This is a company that makes no two pipes alike and they truly create some masterpieces. In their own words: 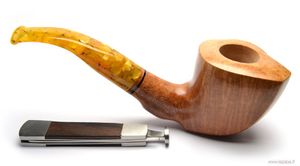 "The Pipa Croci is an artisan enterprise. The pipes which are born from our hands are all differnt from each other. This means that the owner of a Croci pipe possesses something totally unique. Keeping up with the avant-garde in styling and marketing, in addition to our Free Hand we have created the Classical Models. Furthermore we produce several hand-carved objects related to the pipe smoker and made of briar."

So the "Pipa Croci" is the least expensive and the "Gold Flame" the most costly, but the most exceptional. The classification takes place in a careful and accurate manner and the criteria for these choices are form, character of the briar and beauty of its grain.

The Classical models are hand-made reproductions of the traditional shapes. These well-known shapes have the following letter-number references: Billiard = A1; Apple = F1; Dublin = H1, etc.

All pipes are made of "plateau" pieces of briar. The annual production is ca. 3,000 pieces.

An excellent selection of Croci pipes is available at Pipedia Underwriter, lepipe.it

Other brands made by Pipa Croci: