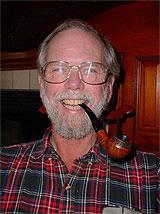 I have been smoking (off and on) and collecting (continuously) pipes since the early 1970's. They have always fascinated me. My very first pipe was a Pioneer Calabash that I bought in a department store in the early 70's while I was in college in Sacramento, California. My second pipe during that same period was a Nording free hand that I got for $20.00 plus a coupon from the back of an Amphora Pipe Tobacco package. The coupon was introducing this new young Danish pipe maker to the U.S. market. I still have both pipes.

I met Mark Tinsky several years ago in the internet when I was in need of a pipe repair, and from his site I found that he was a fly fisherman. I am a fly fishing guide in Montana and a commercial fly tier, and we ended up trading some flies for pipe repair. Last spring, I was in need of a pipe repair again, and when I found Mark's site, I saw that he had a new address in Helena, Montana, where I live and guide during the summer! We got together after I arrived for the season and did some fishing together , and he showed me his shop, and even made me a nice bent Rhodesian pipe while I watched. It's become one of my favorite pipes, dedicated to Mac Baren Navy Flake.

When I expressed an interest in trying to make a pipe, Mark was much more than helpful. He gave me a couple of pipe kits that he couldn't sell for one reason or another, cut the basic shape out on the band saw, and let me go to work making free hand pipes. My first few pipes left a lot to be desired, but I was starting to see what I was doing wrong and concentrated more on getting the proportions and flow of the shape right until I was turning out some decent work. I also learned to cut and drill pipes and turn tenons on stems during this time. I discussed with Mark the possibility of my actually selling my pipes, and he said that he thought there was a definite need for quality hand made pipes at reasonable prices.

And here is the result. All my pipes are free hands, made from the same high quality Grecian Briar used by Mark. There are no fills in my pipes. Some may have small flaws, but they are not hidden, and they are priced accordingly.[1]