Søren Eric Andersen, pipemaker since 1968 with own workshop since 1975. Prefers classic pipe shapes, but does make a nice collection of typical danish freestyle shapes. 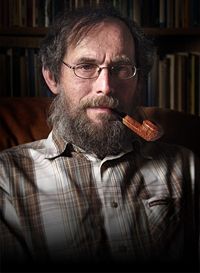 Like many other people of my time, I started to smoke at the age of 14. In that summer I had my first job in the long school holiday. By chance it was at the importer of Orlik pipes in Denmark. During these few weeks I was so tempted by the nice flavour of tobacco that hung so heavily in the air, that I had to try pipesmoking, and before I left the job, I had bought my first Orlik pipe, just a cheap one and a pouch of Red Orlik tobacco.

I was now a pipesmoker, though neither dedicated nor skilled, yet. In the following years I tried quite a lot of different tobaccos and pipes of various quality. I never got the first class Orlik pipes, and I never got my Comoy's Blue ribbon, but I got a very nice Pibe-Dan, and later on a couple Dunhills. After finishing school, at the age of 17, I got a job in the workshop of Erik Nørding, who at that time had around 6-7 people in his workshop. Two of these have later become well known of their own, Poul Ilsted and Jens Tao Nielsen. I have regarded Ilsted as a friend since then. One more person from Nørding's workshop at that time did make a further career, allthough very short, Peter Rafn, who became S. Bang´s first pipemaker.

In the following years I had worked for Preben Holm, and here again with two people who has made their own name: Per Hansen (S. Bang) and Poul Winslow. After a short period there, I changed to Larsen & Stigart, now almost forgotten, but among other things they did manage to supply Dunhill with wild danish fancy pipes. I had a very short period with Zettervig and finally came to W.Ø. Larsen. A lot of well known names have passed through W.Ø. Larsen´s workshop, in my time it was Poul Ilsted, Tonni Nielsen, Ivan Holst Nielsen, Ph. Vigen.

But now it was the time to establish my own workshop, and in 1975 I made it. Since then there have been up's and down's, but one thing has always been upwards, the quality of my pipes.

Among other creative activities, painting has become one of my favorites, and I have allowed myself to show a few here. Anyway, I am still a dedicated pipe smoker.

All the pipes are handmade. There are no fillings in the pipes, and all the mouthpieces are made by hand. All silver rings are made in sterling silver 925.

The pipes are stamped: Eric Andersen - Handmade (in an oval) and Denmark. Due to one of my other passions, painting, the signature in the future will be my initials SEA - Denmark.