Note: Per Per Hansen and Ulf Noltensmeier, who have worked together for the past 50 years making S.Bang pipes have recently announced their retirement. There are no plans for the continuation of this remarkable brand of wonderfully made pipes. For additional information see S. Bang Pipes: The End of an Era, written November 8, 2019 by Chuck Stanion for the Smokingpipes.com blog. 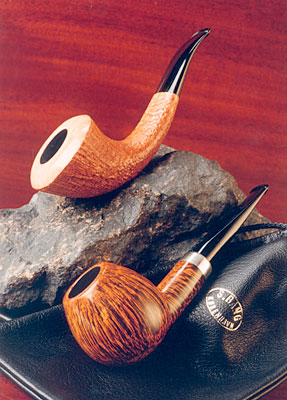 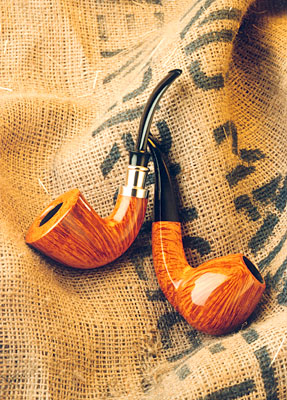 A few pipe manufacturers have made the conscious decision to search out and purchase the best briar available and to invest whatever time is necessary to provide the highest quality. Among the most famous of these high-grade makers is S. Bang of Copenhagen.

Svend Bang, the founder and namesake of S. Bang pipes, made his entry to the world of pipes and tobacco trade in 1941 managing to get a job at a small importer and wholesaler of tobacco. A real bad time to get started: Europe was at war and Denmark occupied by the German Wehrmacht. The supply of tobacco was extremely poor. If contemporary witnesses are to be believed, the Danes packed their pipes - increasingly made off homeland woods - with everything BUT tobacco. But evidently this wholesaler must have known a way to bring some tobacco leaves to the little kingdom for Svend Bang learnt so much about tobacco that he was employed by W.Ø. Larsen after the war.

Working for this old and well-reputed tobacconist in central Copenhagen he learned even more about tobacco and tobacco-blending. Furthermore Ole Larsen, the proprietor, made him responsible for starting a new workshop for pipes situated in connection to the shop. Svend Bang managed to do this with flying colours and W.Ø. Larsen pipes became a bedrock of the Danish freehand fame!

No wonder - like many other businessmen Svend Bang, meanwhile a highly respected expert, wanted to have a business of his own. The opportunity occurred when he got the Danish distribution agency for Astley's tobaccos and in 1968 Svend Bang's pipe-shop was opened! It soon became a meeting-place for those citizens of Copenhagen interested in pipes and tobacco and the sale of the Astley tobaccos was great. Copying Larsen's conception he furnished a pipe workshop behind the salesrooms. At first only repairs were offered but Bang wanted more: pipes to bear his name!

Going for this goal Bang began to hire pipemakers. (He himself made several attempts to make pipes, but his talents evidently did lie in business and not in pipe carving! More later.)

The very first was Peter Rafn, whose career at Svend Bang's however lasted for hardly six months. He was followed by Ivan Holst Nielsen, Jan Windelov and Ph. Vigen. Also mentioned but not confirmed are Ib Olson, M. Thorhauer and others more. Like Rafn most of them came from Erik Nørding, stayed for strikingly short periods only and went off again. Does this indicate that it wasn't really easy to be on good terms with the boss?

The first to come and stay was Per Hansen. Born in 1948 and educated as an electrician, he had started making pipes in his leisure times for Hans Hartmann before he worked short-term - appr. two months - for Preben Holm when S. Bang lured him away in 1970. At PH's manufacture he met and made friends with Ulf Noltensmeier.

Ulf Noltensmeier, also born in 1948 and a native German, began making pipes during his military service. He went to Denmark shortly after and was hired by Preben Holm in 1970, too. Evidently, Noltensmeier and Holm were not on good terms. When he asked him if they could do something about the noise in the workshop Holm, basically a lad of 23 at the time, said NO, if you don't like it, you can leave. So he did to work for Anne Julie subsequently for 15 months before he followed Svend Bang's call in 1971. Now the Bang crew was complete and the success story of the S. Bang Pipes really began! 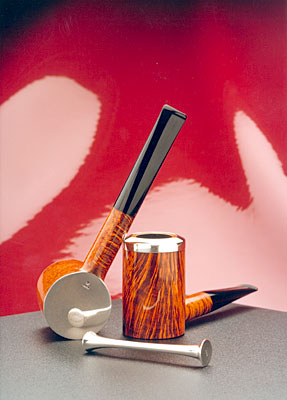 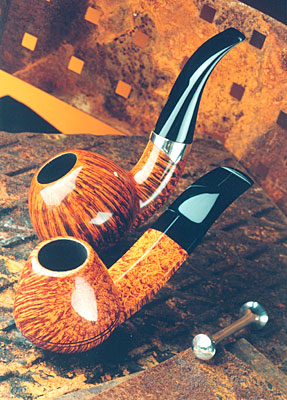 The beginning wasn't free of conflicts and turbulences, for initially not all conceivabilities of Hansen and Noltensmeier concured thoroughly with Bang's. The latter was deeply impressed with the enormous success of Preben Holm, who managed a real pipe factory with more than 40 people at this time and produced high-value pipes in huge numbers. Svend Bang wasn't unwilling to see his business developing into this direction. Also detail questions had to be clarified. For instance, Bang found hand-cut mouthpieces too costly and time- consuming - His young pipemakers however were set on meticulous, complete handwork in every aspect and using the very best materials exclusively. Bang finally let convince himself by the success of the absolute quality Hansen and Noltensmeier produced. Fortunately, one would like to add.

The overwhelming worldwide success of these high-grade pipes soon exceeded the capabilities. By the end of 1975 the workshop bursted at the seams. So, in 1976 Bang's Pibemageri resettled in Struenseegade 9 in Copenhagen's northern area where it is yet today.

Time for an interlude - the Löfberg Pipes!

As insinuated above, Svend Bang himself never was nor became a good pipemaker. However that did not prevent that he occasionally tried it. Ca. around 1976/77 he got really serious about it. It’s conceivable that Hansen and Noltensmeier lended their boss a helping hand in his efforts to create pipes but as well they seriously dissuaded to offer these pipes as original S. Bang Pipes due to the minor quality.

Svend Bang wasn’t to be discouraged so easily and approached his German distributor Otto & Kopp with a suitcase full of sample pipes he presented to Bernd Kopp, at that time managing director. These pipes had been named Löfberg - the girl’s name of Bang’s wife. Well, Mr. Kopp was not convinced either - particularly of the pipes’ quality – and clearly stated his opinion that Bang would not do a favor neither to himself nor to the original Bang pipes offering them. - Thereupon Svend Bang went off empty-handed and deeply insulted - simply leaving behind the Löfberg pipes in Mr. Kopp’s bureau…

Almost forgotten the Löfberg pipes gathered dust in the warehouse of Otto & Kopp for approximately 28 years. Until Oliver Kopp showed them in 2005 to Volker Bier, engaged tobacconist, inspired pipemaker and founder of the Lohmar Pipe Show, who was in search of something special to offer to his customers. When Bier presented these pipes to the public, some well-known "pipe experts" felt called to cast doubt on the authenticity of these pipes at the top of their voices. The “arguments” and “evidences“ these gents cited are hardly to surpass for their absurdity. Obviously they found the idea intolerable, that there might be pipes that had remained unknown to them. Therewith not enough - Volker Bier had to fend off vilest personal defamation. Thankfully he was saved by Oliver Kopp and Hansen & Noltensmeier who confirmed the origin of the pipes and their authenticity: Löfberg pipes are real Bang pipes – made by Svend Bang in person! 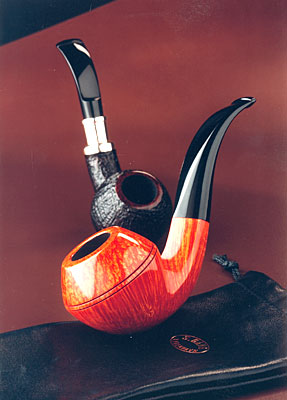 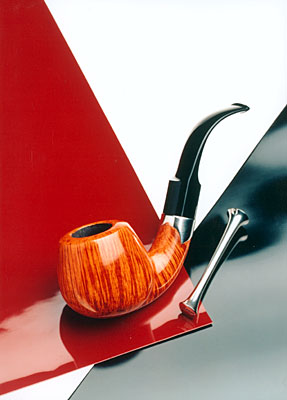 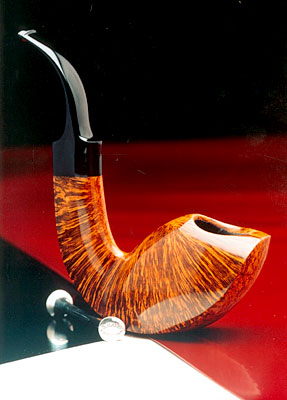 After the grim end of his pipemaking efforts Svend Bang took up other meritorious activities. He was a very active member of The Nordic Smokers' Guild and became one of founders and following editors of the magazine Piber & Tobak started in 1978. He was also heavily involved in the arrangements of the first national competitions in pipe- smoking in Denmark.

Svend Bang retired in 1984. Evidently he felt a great deal of pride in the product that he initiated throughout his career and retirement and until his death in 1993.

Once Hansen and Noltensmeier took over the company (in 1984) they knew it was best to retain the S. Bang name - the two carvers always shared the same philosophy about that. Noltensmeier and Hansen were determined to maintain top quality at the expense of increased numbers. The only change they made concerns the stamping on the pipes changing from the English version "COPENHAGEN" to the Danish "KOBENHAVN".

Still, they are two separate carvers, with their own styles and preferences. Each makes his own pipes - there is no "assembly line" construction at S. Bang. They bounce ideas off of each other, of course, and admit that when problems arise in a pipe, it is nice to have a partner to discuss them with.

Though they carve pipes as individuals, there are similarities in their work. All Bang pipes are made with black, hand-cut vulcanite stems.

The same engineering is used by both carvers as well. The shape and size of the tobacco chambers vary according to size and design of the pipe, but each carver follows the same design guidelines for choosing the proper chamber dimensions. The smoke channel is always engineered for optimum performance.

Bang pipes are noted for the high definition and fine contrast in the grain. They undergo a double staining process to achieve that effect. The technique makes the grain leap from the bowl of the pipe, making well-grained wood become extra ordinary. The same coloring, however, will produce different results in different pieces of briar, making each pipe truly individual.

Per Hansen is the designated sandblasting artist for the team. He personally takes those pieces that are to be sandblasted to Stanwell, and is permitted to use the sandblasting equipment himself. That is the only S. Bang process, though, that is not executed by the individual carver of each pipe. Everything else, including the famous S. Bang silverwork, is done in the shop by each of the carvers on his own pipes.

According to the system introduced by Svend Bang in 1970 most European-bound pipes are stamped with letters to designate the grade in the following ascending order:

Bang pipes for the U.S. market are stamped with year and number codes and the personal stamp of the carver. The number is not a grading stamp - it just indicates which pipe it is. For example, 9736 with the stamp PH would indicate that it was the 36th pipe made by Per Hansen in the year 1997. There are no grade stamps on U.S. pipes - all S. Bangs are high grade.

The S. Bang workshop is almost invisible in the bustling city of Copenhagen. A more elaborate storefront is not required, because S. Bang pipes are not sold in Denmark.

Former Contact Information: (Not sure how long now that they have announced their retirement)

The above is based on an article used with kind permission from Danish Pipemakers. Images also courtesy of Lars Kiel.