Max Schulte (†) - the name is sometimes misspelled "Shulte" - operated a pipe & tobacco shop in Newark and later in Maplewood, NJ. 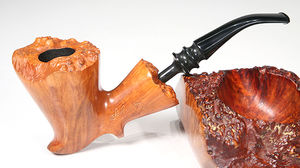 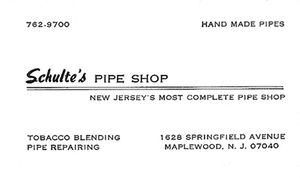 "My first pipes and tobaccos came from Max's shop in Maplewood (I think it was on Bloomfield Avenue near Hy's Cheesecake) back around 1965. The smell on entering either of these stores was sublime. I remember him well standing at the polishing wheel just off the counter, wearing a long workman's apron, working on one of his characteristic classic shapes. The wall behind his tobacco counter was filled with rubber clips holding these as well as Savinellis, Sasienis, and Stanwells. I think he was actually on the front edge of the Danish trend. Max could polish a pipe in five minutes & have it come out looking new. He also blended an Oriental/Balkan blend (I think) called "Maritza" that was the finest of its kind (that I ever encountered) in those days. Max was always willing to share his extensive knowledge of pipes and tobaccos with any customer, even a young know-nothing like me, and seemed genuinely glad of the company. BTW, the going price for a half-pound of Maritza in those days was about seven dollars. It was worth every single cent."

As Schulte’s son Howard reported, later a skilled pipe repair man himself, Jack H. Weinberger (→ JHW Pipes), a retired lawyer from Virginia, often sat in his father’s workshop for hours and hours, enjoying his pipe and a mug of coffee and simply watching the father working on his pipes. This was JHW’s "training" to become a pipemaker!

"WOW, can the internet spread BS as fast as an electron or what! The store was first located at 672 Springfield Ave. Newark, NJ. It then moved up Springfield Avenue to 1628 Springfield Ave. Maplewood, NJ. Hy's Cheesecake was further up the avenue by about four blocks and they did have the BEST cheesecake EVER.

The smell of entering the store was pure STINK. Can you imagine seven ashtrays all around the store with burning and crushed out cigarette butts, with ant mound sizes of scraped out pipe tobacco with human saliva at the base adding to the decomposition process? The only time the store smelled good was when there was tobacco blending taking place down stairs in the basement. Maritza (sorry I think the spelling is incorrect) was not a blend but a stand-alone Balkan tabac <-- As they used to call it. The old joke about Maritza and Dear Tung was "Free Elastic Bands issued with every order". What were the elastic bands (Rubber Bands) used for? To put around the cuffs of your pants because the strength of these tobaccos would knock "IT" out of you. Anyone want the How To Blends of each and every one of the Schulte Tobacco Secrets?

The Repair Shop – For the Newark store was located to your left as you entered the store. Surrounded on three sides by glass. It was the main attraction both in the store and as you walked on either of the two sidewalks that bordered the corner store. In the Maplewood store it was to the rear of the shop. Well, rear is relative. The front had the colonial style windows. The rear had a wood paneled hallway that led into the selling floor. The Repair Shop was to the left of the hallway if you accessed that way. There were two polishing setups. One was a part of the Lathe where most of the work was accomplished. The other was on a separate bench diagonally and behind the lathe. That way both locations could be used at the same time. Remember how a pipe was polished? DISGUSTING! You had to remove the tobacco / remains and place your finger into the bowl. Into the bowl with that disgusting saliva at the very base, rotate the pipe around that finger while holding it against the pumice and polishing wheels. Some smokers drooled into their pipes as if it were a pacifier. You don’t want to know how tobacco is blended! 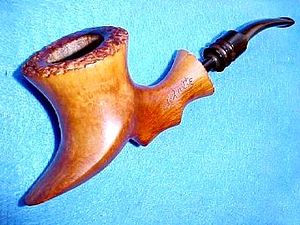 Howard Schulte was Max's nephew, Barry Schulte was his son. The way to remember them and keep them straight is: Barry was the tall skinny kid (yes kid at the time (Maplewood, NJ store), he was only 24 when he was Honorably Discharged from the US Air Force) he grew up LITERALLY in the store from birth, as he lived directly over the store when in Newark and play pen was at times set up in the store. If you ever talked to Barry about anything other than smoking you would learn his interests included Boy Scouts, Amateur Radio (HAM Radio) (Instructor), R/C Planes (Instructor), X/C Skiing (Instructor) First Aid (Instructor) and SCUBA Diving (Instructor). He did about 80% of the pipe repairs and 99% of the tobacco blending. Max was in semi-retirement showing up to keep an eye on his Beloved Store, it was his life. Max did the repairs almost full time at the Newark store and taught both Barry & Howard the tricks of the trade.

Howard was about 10 to 15 years older than Barry with a full beard and mustache. He was a part time employee at the store as his main profession was a collage teacher, teaching math and statistics. He was also a Boy Scout (Eagle Scout) and that is how Barry became interested in Scouting. There is a story Barry tells of how Howard taught him TOTENSHIP - The Boy Scout Right to carry and handle a knife and ax. It was a Friday night, and Barry came home from the weekly Scout meeting and was just at tears. He just passed his Totenship requirements and with the first use of the ax his Scout Master declared a misuse and cut a corner of his card off. If you lose three corners of the card you have to start all over again. Well, Howard seeing Barry in this upset state asked what was wrong and Barry explained. Howard started right at the beginning and went through the entire course teaching quite a few more disciplines and tricks than the Scout Master. The following Friday at the Scout Meeting there was a review of the Totenship requirements and skills. There the Scout Master made a misuse while working with the ax, Barry was quick to point it out. No, he did not cut a corner off the Scout Master’s card, but from then on Barry taught the Totenship Course. He NEVER forgot his Cousin Howard for that.

The name has is sometimes misspoken and misspelled. It is Schulte, with the end pronounced as TEE or TEA."