Taylor & Breeden, Ltd. was a tobacconist and pipe dealer located in in Manchester, England. Although the company's origins can be traced back to 1851, it was started in 1900 or 1901 by Joseph Taylor and Henry Breeden.

They were located at 39 Cross Street which is in the currently-named Northern Rock Building Society building (National Heritage List #1197939) on the corner of King and Cross streets.

The company was liquidated in 1981. The site is now the location of a tobacconist/newspaper/stationery/book shop (currently Mirage News). 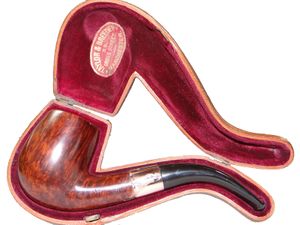 Most of the early briar and meerschaum pipes sold were likely made on-site or locally. Later, many of their briar pipes were "own brands" supplied by well-known English pipemakers such as Barling, GBD, Comoy's, and others. "Breeden's" and "Breeden's Own" are also believed to be Taylor & Breeden brands.