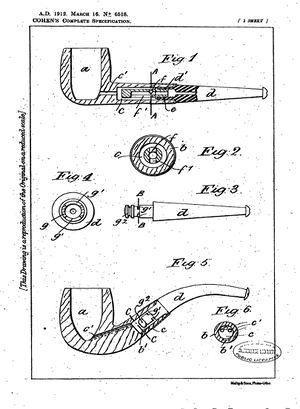 The Patent Number on Trebor pipes is 6518/12, and it was granted to Baron Cohen of Baron & Co., Cigarette Specialists - Piccadilly, London W - on December 12, 1912 for his design for a "cooling chamber" in the stem of a pipe.[1] According to Wilczak & Colwell in their book titled "Who Made That Pipe?" Trebor was a brand of Cyril Arnold LTD/Baron & Co.

Trebor pipes were apparently bundled along with John Cotton products in promotion material in various US tobacco publications. This is mentioned in a thread on Pipesmagazine.com, which includes the following comment by Jonathan Guss:

"More obscure is the progressive ownership of the Trebor pipe. It continues to appear in industry brand listings through 1957, after which is disappears, never to return. Over the approximately 36 years for which I have data, it is shown as owned by Cohen & Co. in 1921, by Trebor Ltd and Cyril Arnold Ltd from 1927-1929; by the same two entities plus Baron & Co. from 1932-1938; by the same three entities plus L. Hill & Co. in 1939; and after a gap in the listings reappears as owned solely by L. Hill & Co. from 1949-1951; finally from 1953-1957 the name is owned by Trebor Products & Agencies. What does this alphabet soup of entities mean? Without a lot more digging I can't say. Several are clearly related to Baron Cohen the man; others are more obscure, bobbing up on the waves for a few years before sinking without a trace. Cyril Arnold Ltd, for example, only appears in the London phone books from 1925-1930. Similarly brief appearances are true of most of the other companies."[2]