Bob Tredway is a pipe maker out of Coeur d' Alene, Idaho. Began making pipes in 1965 for himself, spending up to 10 hours on one pipe, later to average two pipes a day for himself and others. 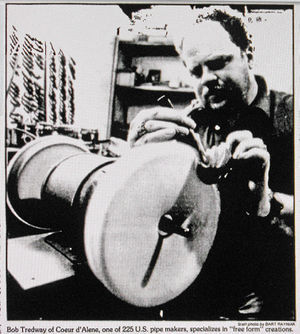 According to a local newspaper article he made about 200 pipes a year, and back in 1984 sold them for $40 - $80 each, and on the requests of the buyer even up to $250. His pipes were made from Mediterranean briar, which have been boiled and dried for 2 years. He might have to go through 3 of 4 blocks to find one he is satisfied with, as he never does putty fills like the commercial pipe makers do. He specialized in freehand or Free-Form creations, and also made a log of pipes for women. Some of his unique pipe designs were for viewing, not really made for smoking.