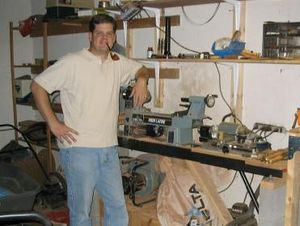 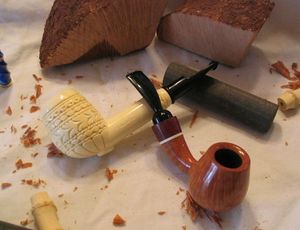 Tyler Lane Beard is a part-time pipe maker who has significantly influenced the most recent generation of pipe makers through starting the pipe makers forum, and his excellent pipe making videos, which can be seen from his website.

I started smoking cigars while in college during the cigar boom in the early 90's. After graduation I took a job as a chemical engineer in the oil field of West Texas. At that time I started a cigar business with a friend. After two years I sold my interest to him, and he is still operating today. During college and my cigar days, I tried my first pipe. I bought an $18 basket pipe and some aromatic tobacco. It was wholly unsatisfactory. It was hard to keep lit, produced thin wispy smoke, and scorched my tongue. I stuck with cigars.

Some years later, my mother-in-law sent me some pipes she had found while helping her sister clean out her attic. Having sold the interest in the cigar business by this time, and having had about five years for my tongue to heal from my brief foray into piping, the pipes renewed my interest in tobacco. I immediately went to the 'Net and began researching pipes and tobacco. Having been a fan of ASC (alt.smokers.cigars) on the early 90's , I went to Usenet to see if there was an ASP (alt.smokers.pipes). Indeed there was! Since that day I rarely go more than a day without reading up at ASP. That was summer 2001.

Somewhere in my "research" on ASP and the web, I decided that I would try to carve my own pipe. Not having a large disposable income, I thought that carving my own pipe would provide we with the best possible pipe for the least amount of money. So I bought a plateau pipe kit from Pimo, some hand files, sandpaper, a cheap bench grinder, some buffing wheels and buffing compound, and some carnauba wax. $100 later, I was ready to carve. After about forty hours of hand filing I had what I wanted, a buffed, waxed and beautiful straight grain pipe. It was a lot of fun, and I even made something that looked like a pipe.

I was hooked. The next step was to accumulate the tools necessary to start from scratch with a block of briar. Before starting this pipe making venture, I had essentially no woodworking tools. In fact, I even had to build my first workbench. (And of course I had to borrow tools to build the bench!) Gradually I bought up the necessary pipe making tools as I could afford them. A Dremmel here and drill bits there, some stain, some stems and briar, a Pimo tenon turning tool, and then finally the big one: a Delta Midi wood lathe for Christmas. While buying up tools I was diligently studying pipe making. I also asked questions on ASP and in personal e-mails with pipe makers. Trever Talbert's now defunct web page was, of course, a HUGELY helpful resource, and Todd Johnson of STOA Briars sold me some much needed tools early on. Cornelius Mänz has been an incredible help, both with pointers and materials. Along the way Trever Talbert, Brian Ruthenberg, Andy Ogura, Todd Johnson, Bill Weist (Cats Paw Pipes)and especially Michael Lindner have been great resources for answering my pipe making questions. (Thanks guys!)

Once I had the wood lathe -- after I had saved up enough to buy the necessary accessories -- I began making pipes in earnest. The only tool that I really lacked was a lathe for turning tenons on stems. I was using a Pimo tool with wholly unsatisfied with the results. Then came the opportunity to buy several used tools. I bought a Taig micro lathe for stems, as well as a band saw and several other key tools that sped up the pipe making process. At that point, with the gaps in my tool box filled, the quality of my pipes took a move in the right direction, and I became comfortable with the notion of selling my pipes. I began developing my skills, and pursuing the creation of the "perfect" pipe. I love it!

The following are several fine examples of Tyler's excellent work in the pursuit of pipe perfection: