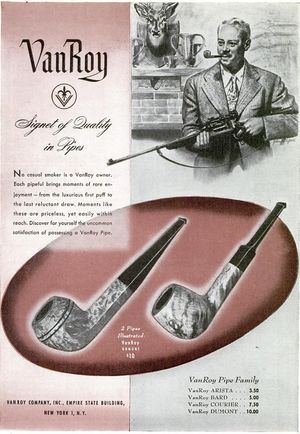 The VanRoy Pipe Company, originally located in the Empire State Building in New York City, began as its own pipe company, and the originator of the Ajustomatic feature better known from its later use in Dr. Grabow pipes. No evidence can be found of their existence prior to October, 1944. When Henry Leonard & Thomas moved to Sparta, North Carolina in 1953, in addition to purchasing the rights to the Dr. Grabow line, they also purchased other New York pipe firms, including the VanRoy company. After moving to Sparta, HL&T at some point revived the VanRoy name for a cheaper line of pipes, but the later pipes did not have the ajustomatic feature, and instead a push tenon.