Difference between revisions of "W.Ø. Larsen"

W.Ø. Larsen was one of the most famous tobacco shops in Copenhagen, with a beautiful store located on Copenhagen's famous "Walking Street." During the flowering of the Danish pipe in the '60's, they first began retailing pipes by such carvers as Sixten Ivarsson, Sven Knudsen, Poul Rasmussen, and Brakner. 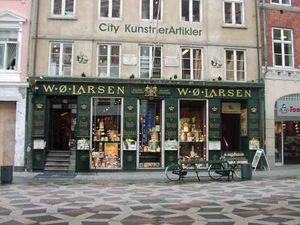 Urged on by his store manager Sven Bang (S. Bang), the owner, Ole Larsen, decided to begin making pipes in the basement of the shop. He first hired Sven Knudsen as the pipe maker, who soon passed the job to his protégé Hans “Former” Nielsen. Larsen’s fortunes rose along with the rest of the Danish pipe business, and Former was soon managing a group of carvers in the old Larsen cigar factory. Among these were Teddy Knudsen, Tonni Nielsen, Jess Chonowitsch, Peter Hedegaard and others, who were responsible for the Select and Straight Grain series before they branched out on their own. After Former left to start Bentley pipes in Switzerland, his duties were taken over by Soren Refbjerg Rasmussen, while the straight grains were made by Teddy’s student Benni Jorgenson. As Ole’s health began to fail, the reins were taken over by his son Nils. Nils became convinced that the way for Larsen to prosper was by entering the low-end market, and acquired the Georg Jensen pipe factory to make an array of less expensive pipes. This turned out to be a fatal error, and Larsen was recently sold to Stanwell, who continue to produce so-called “Larsen” pipes in their huge factory. Thus ended an important part of Danish pipe history. Courtesy, FinePipes.com

From The History of Danish Pipes, by Jakob Groth 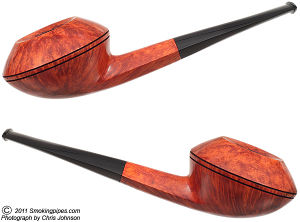 Like most W.Ø.Larsen pipes, we don't know the maker, but they certainly were good! Courtesy, Smokingpipes.com 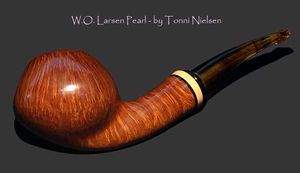 And sometimes, we do know the maker, like this beautiful W.Ø.Larsen Pearl by Tonni Nielsen. Courtesy, Richard Freidman 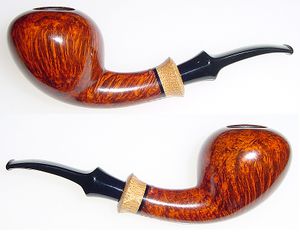 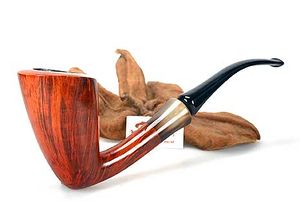 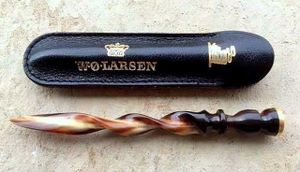 W.Ø.Larsen is Denmark's oldest and probably the most famous pipe and tobacco Store, placed in the center of Copenhagen on the main pedestrian street, Stroget. If you visit Copenhagen and do a "pipe crawl" this Store is a must. In the beginning of the 60's the Store had begun to sell Danish handmade pipes, especially from Poul Rasmussen. This went very well and Poul Rasmussen could not keep up with the demand. W.Ø.Larsen - with their dynamic business manager Svend Bang (he later started in business for himself) - decided to establish their own workshop in rooms next to the Store.

The first manager of the pipe shop was Sven Knudsen, but he soon left to make pipes under his own name. The next manager was Hans Nielsen, also known as "Former" (named after the late British actor George Formby, with whom he had some similarity. By coincidence in Danish Former means Shapes). Under the management of Former the workshop grew and W.Ø.Larsen pipes became a very good name abroad. Among the prominent pipemakers educated here were: Else Larsen (Denmark's first female pipemaker),Poul Ilsted, Ph. Vigen, Teddy Knudsen, Tonni Nielsen, Peter Hedegaard.

Typical for the W.Ø.Larsen School is the semi-classic shapes, that means classic shapes, but slightly different, often a little more full or round. The pipes often have lower point of gravity. A typical billard would have a bowl shaped more like a pear and the connection between the bowl and the shank would be clearly distinguished. Yellow and orange are colors more widely used for the finish

W.Ø. Larsen, along with Pipe-Dan made beautiful catalogs in English. They were wonderfully illustrated and informative for the pipe smokers of their time, and perhaps even more so for us looking back into that amazing time for development of the Danish pipe makers.

Here are links to two complete W.Ø. Larsen catalogs on Pipedia: File:Wo1.pdf, and 1961-62: File:Wo2.pdf, courtesy Danishpipemakers.com, and a few example pages from the 1961-62 catalog bellow: 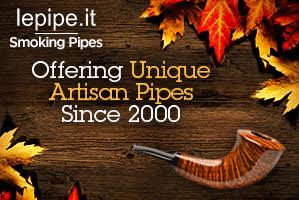 An excellent selection of W.Ø. Larsen pipes is available at Pipedia underwriter, lepipe.it