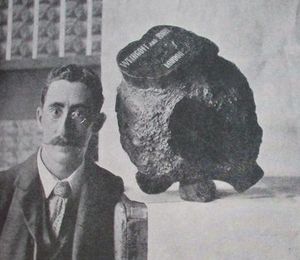 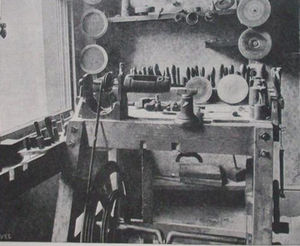 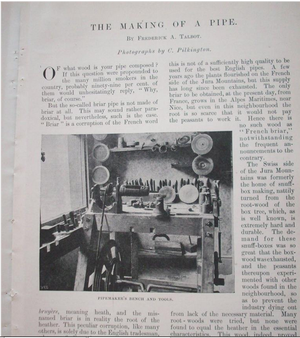 The article from 1899 where Mr. Frederick A. Talbot interviews Mr. J. Samuel Weingott in his workshop in Fleet Street, London, UK. 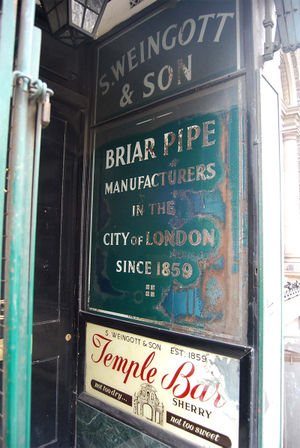 Today (2012) the shop is owned by a wines & spirits retailer, the original Weingott tobacco shop sign is still visible on the right hand side; photo by:[Danny McL] http://www.flickr.com/photos/dmcl/3383720008/

Mr. Weingott, a tobacconist at 3 Fleet Street since 1859 was an insider, a true "connoisseur" who had an incredible knowledge of tobaccos deriving from his trading experience, to which he was adding now a unique pipe manufacturing experience, rapidly becoming the authority in working the Briar. Weingott had very high ethics driven by an obsessive aim at excellence often disapproving and exposing the continental fakes and tricks:"sold by unscrupulous cheap and foreign firms; but the Englishman is a good judge of a pipe. He detests flaws of any kind. I used to sell these defective blocks of briar at a penny per piece, and have sent away as many as 40.000 condemned Briars at a time, but now I burn them all! The Briars were sent abroad, and the cracks and flaws stopped with putty or some other composition, and then stepped in a strong solution of permanganate of potash, which deeply coloured the wood and made the defect invisible except on close inspection. all those Briars you see of chestnut colour have passed through the permanganate of potash bath or some other dye, and are then varnished, and you may rest assured that there is a defect somewhere-they would not be that colour if it were not so, because natural briar, although it becomes dark with age and exposure, displays the natural grain."

Weingott was for most of the XX century THE oldest brand of Pipe manufacturers in London, or at least the oldest legal manufacture registered in the London Directories. Notice the explosion in Pipe making factories by the turn of the century and contrast it with the single mention to Weingott in 1884: