Difference between revisions of "Yello-Bole"

In 1932 Kaufmann Bros. & Bondy (KB&B), est. 1851, expanded their programm consisting of KB&B pipes, Reiss-Premier and Kaywoodie as the mainstay brand by introducing the Yello-Bole line. Yello- Bole was designed as an outlet for lower grade briar not used in Kaywoodie production. 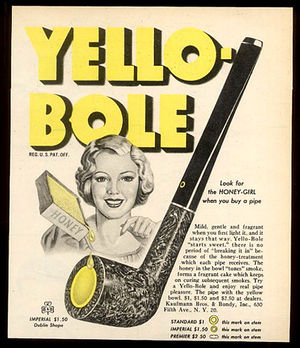 From the time of S.M. Frank's purchase in 1955 until 1972 Yello-Bole was run as a separate company, as division of the parent. Through this period, Yello-Bole, same as Kaywoodie, had it's own officers, sales force and maintained the production facilities in West New York. These 17 years were probably the most glorious years in Yello-Bole's history.

In 1966 S.M. Frank had developed a synthetic material called Brylon as a cheaper alternative to briar. This material was immediatly used for Yello-Bole pipes, and millions of these pipes have been sold in the decades since then. They continue to be part of the Yello-Bole and Medico brands. At the moment Yello- Bole offers 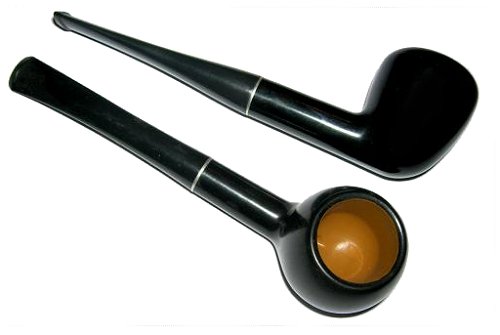 In 1972, S.M. Frank constructed a new building to serve as production facility and corporate offices on Horse Block Road, Yapank, Long Island, and around the same time S.M. Frank's pipe brands started appearing in catalogs together.

Yello-Bole's more recent history was subjected to the same processes as S.M. Frank's other brands. For a detailed description see the S.M. Frank article, please. All briar Kaywoodie, Yello-Bole, and Medico pipes, as well as private label pipes, are produced at the manufacturing facility in Tampa, Florida today. All Brylon pipes are manufactured in Peekskill, NY.

The Yello Bole Aristocrat Airograte: An Aluminum and wood pipe with a twist. This pipe doesn't have a bowl per say, but more a briar cylinder that screws into the base of the body. At the bottom of the bowl is a metal grate, thus allowing air to be pulled through all the tobacco and reducing any chance of clogging. The lower bowl catches all moisture and tar reducing bite. These pipes can be had in a silver/chrome finish as well as a soft gold finish. The stem of these pipes has cooling fins up each side, and can be found in a straight or bent form.

Yello Bole also had a line of Bamboo pipes at one point.

Need to track down 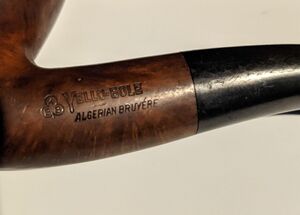