A Pipe Parable in Chapter and Verse

From Pipedia
Jump to navigation Jump to search
A Pipe Parable in Chapter and Verse
Ben Rapaport (June 2022)
Exclusive to Pipedia.org

Follow the trail of a very old pipe as it traveled through time and across the Atlantic Ocean twice in a span of about 75 years, passing from one collector to another with its last stop at an auction. It’s as accurate an account as I remember it, although the names of a few participants have been forgotten. Because the story has twists and turns, it’s presented as a chatty narrative.

Chapter One. In The Beginning

Sometime in the early 1990s, I was visiting David Wright, Director of the Museum of Tobacco Art and History, Nashville, Tennessee, to discuss the pending formal appraisal of the Museum’s collection. Sitting in his office, I noticed several Polaroids of an assortment of pipes on his desk and asked about them. He stated that a woman in New York State sent them to see if the Museum would be interested in buying them. David was not interested and gave the Polaroids to me that illustrated six pipes: five African carved wood pipes and one bone or ivory pipe. Old bone and ivory typically exhibit striations, and it is usual for mammoth ivory to show cracks, discoloration, and inconsistencies. I was not sure of its age or its provenance. And I certainly was not sure if it was used to smoke tobacco, herbs, plants, or something else.

When I returned home, I decided that these pipes looked intriguing enough, so I called her, and advised that Mr. Wright had given me the Polaroids and that I could contact her and make an offer. I asked: “What do you know about these pipes?” Her reply: “My late husband was an antiques restorer and someone had brought them in for repair years ago.” I followed with “Is there a record of the owner’s name or when he brought the pipes to the shop?” “No,” she said. “My husband passed away before he could undertake the restoration, and the owner never returned to retrieve the pipes. I want to sell them now.” We agreed on a price for the six pipes and soon they were in my collection. 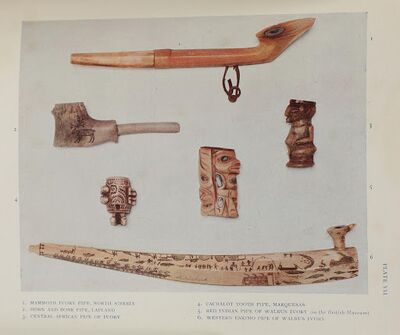 About two years later, a pipe collector-friend from Washington State visited me. After showing him the African pipes in which he expressed interest, I asked his opinion of this other pipe. He interrupted his train of thought as he turned his attention to one of my pipe books and pointed out that this pipe—or one quite similar—was illustrated on the spine of the dust jacket of the Alfred Dunhill opus, The Pipe Book (1924). Needless to say, having owned this pipe for two years and the Dunhill book for much longer, I was very embarrassed. Opening the book, there it was in Chapter VII, “Pipes of the Far North,” Plate VII, “1. Mammoth Ivory Pipe, North Siberia.” Alfred writes: “Just as walrus ivory is the favourite medium for artistic expression among the Eskimo, so is fossil mammoth ivory among the tribes of Northern Siberia, and the British Museum has several examples of pipes made from this material, while two very fine examples, one mounted in metal, are included in the Dunhill collection (Plates VI. And VII.).” Accompanying this text is a line drawing: “Fig. 81.—Mammoth Ivory Pipe: Native Pattern.” There were also line drawings of the five African pipes. I had just become the unwitting owner of six pipes from the Dunhill Pipe Museum!

A word or two about Mammoth ivory pipes is in order. “Mammoth ivory was not extracted, traded, or used for crafts until the end of the eighteenth century. …Mammoth ivory was rarely used, though sometimes was employed in making sewing needles, arrowheads, and smoking pipe heads, often following a ritual asking for the animal’s forgiveness” (Zinaida I. Ivanova-Unarova and Liubov R. Alekseeva, “Ivory Carving in Yakutia,” berghahnjournals.com). “The Pipes of All Peoples” (Birmingham Daily Post, December 16, 1870) describes an exhibition of William Bragge’s expansive pipe collection in that city. I quote in part: “From the north to the south of the two Americas, similar examples [of pipes] are shown; from the pipes made of mammoth tusk, among the Samoyeds [indigenous people of Russia], where only driftwood is found, and where bone only will stand fire, and from the whalebone pipes from Sitka and Greenland, down to the medicine-pipes of Paraguay, and the tinder-boxes made of the tooth of a tiger and the tail of an armadillo, every variety of American pipe is shown.” “Indeed, there are several specimens from Asiatic Russia, the work of the Samoyedes and Esquimaux, which may truly be said to confound those learned persons who think that the remains of pre-historic European art could not have been produced by semi-savage races. The materials used by these northern people are sometimes granite, but usually mammoth ivory and whalebone” (Harry V. Barnett, “The Pipes of All Peoples,” The Magazine of Art, Vol. VI, 1883). (Note the deliberate absence of the word “tobacco” or “smoking” to modify “pipe” in these descriptions, and neither word is associated with any Mammoth ivory pipe cited later in this narrative.) 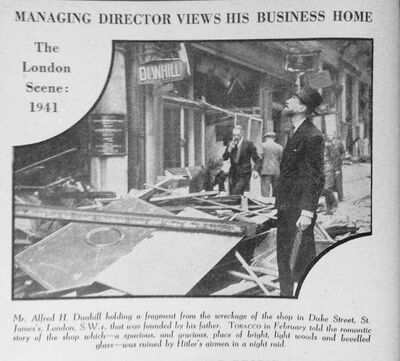 Dunhill in front of his shop, Courtesy, pipedia.org

I needed to investigate further. How did these six pipes end up in the United States? Who brought them and when? In Our Family Business (1979), Mary Dunhill mentions that the Dunhill store (and many others in the surrounding area) was destroyed during the Luftwaffe blitz bombing of London in mid-1941. According to Tommy Zman Zarzecki, “Churchill Cigars” (famous-smoke.com): “After the Nazi blitz on London in 1941, enemy bombs all but blew the famed Dunhill cigar shop to pieces.” Alex R. Iapichino, “The History of the Dunhill Cuban Cigars” (cigarsense.com) tells it slightly differently: “War wreaked havoc in Central London, and on 17th April 1941 at around 3.00 am in the morning, the Alfred Dunhill shop was hit by two parachuted land mines destroying much of the premises in Duke Street.”

And a more detailed explanation is in Michael Balfour, Alfred Dunhill. One Hundred Years and More (1992): “…after a lull of many weeks German air raids were resumed on 19 March 1941, with increased intensity. Early in the evening of Wed. 16 April, the bombs began to fall, by 2:30 AM on the morn of 17 April they were falling at roughly 20-second intervals. It was the heaviest raid on London since the war began. At about 3 o’clock that morning two land mines, each weighing about a ton and suspended from parachutes of green silk, hit the Alfred Dunhill shop and destroyed most of it. The Jermyn Street shop area was completely destroyed, but part of the old Duke Street premises survived the blast. Most of the stocks and all the museum were lost, but the shop cat survived.” (Lost, as in missing or physically destroyed?)

I contacted Peter Tilley, the curator/archivist of the Dunhill Pipe Museum, who indicated that during the raid, everything that was not destroyed was boxed up and temporarily placed on the sidewalk. Furthermore, he added, company records indicate that a few passersby had pilfered some of Alfred Sr.’s antique pipes, but there is no list of how many or which pipes had been taken. Of course, he couldn’t explain how or why these particular pipes ended up in the United States. I offered to return them and he replied “Finders-keepers, Ben.” So, I kept them … for a while. 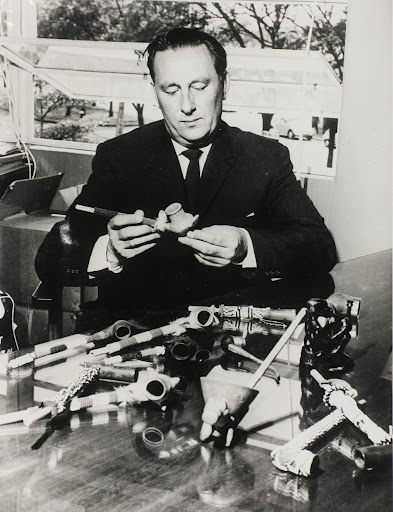 Because I have no interest in ethnographic pipes, I sold the five Africans to the collector who had visited me earlier. As for the Siberian Mammoth ivory pipe, I contacted Britain’s most well-known pipe collector, J. Trevor Barton, “The Pipe Man,” who religiously visited flea markets and boot sales on weekends. He had travelled widely during a sales and marketing career that helped him grow his collection of Haida argillite, Plains Indian, Inuit, Eskimo ivory, tomahawk, steatite pipes, African ethnographic pipes, and Chinese opium pipes. I had befriended him, admired his dedication, and envied his extensive collection of pipes from around the world amassed in about 50 years. He was very influential in my collecting years. In time, the “six degrees of separation” theory played a role, because we found something else in common besides pipe collecting: geography and family. He visited me once in Virginia, and the second time was a memorable meeting on Cape Cod to celebrate two birthdays in the same month, his sister (who lived in Yarmouth Port), and my mother (who lived not far away in Orleans). (View a short, color YouTube video clip of young Trevor in his smoking room, “Pipe Collection Beware,” from the 1950s.)

Trevor wanted this Mammoth ivory pipe, so an exchange occurred sometime in the late 1990s, and I received one of Trevor’s carved meerschaum pipes.

Trevor passed away in 2008 and, in September 2010, Christie’s, South Kensington, hosted the auction of “The Trevor Barton Collection of Unusual Smoking Pipes,” followed by a second auction of more of his collection in November 2010 (“Christie’s Interiors”). One bidder described the two sales as “…an anthropological treasure trove of global pipe smoking going back several hundred years.” Being familiar with Trevor’s vast collection, many pipe rarities, including the Mammoth ivory pipe, were not listed in either auction catalog. It’s likely that the family had decided to retain the balance of the collection for disbursement at a future time.

Ten years later, Sworders Fine Auctioneers, Essex, England, conducted a three-part auction (September, October, and November 2020) of the remaining Barton pipes. Just as the sun also rises, so did this Mammoth ivory pipe. In the first auction, an online “Fine Interiors” two-day sale, it was Lot 179 (of some 70 lots), described as: “A rare mammoth ivory pipe. Samoyed, East Siberia, the flared bowl with an octagonal shaft, with a detachable mouthpiece and a leather suspension strap, 31.5 cm long, together with a copy of Alfred Dunhill’s ‘The Pipe Book’ (2). Provenance: Alfred Dunhill Collection; The Trevor Barton Collection.” The House estimate was £2,000-3,000, and it realized £2,300 (about $2,900)!

A century ago, Alfred Dunhill owned this pipe, and it has since come full circle. Believed to have been appropriated in London in mid-1941, it found its way to the United States and into my collection, then into Trevor Barton’s collection, and now it has a new owner. Its history is certainly unique and it is now a matter of record on Pipedia.org.

This affair has also taught me an important lesson: I need to be more curious and observant about the provenance of my pipes; I need to do my homework! And, although I’ve been an antique pipe collector for more than 50 years, I’m still on the learning curve of determining an antique pipe’s value and worth, because I never expected this pipe to realize a buy of almost $3,000. My mother used to ask me: “Why are things that are so very old, so very expensive?” Given this auction example, I may never have a convincing or a coherent answer.