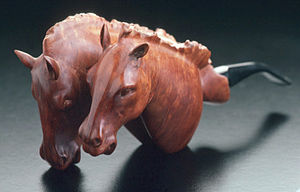 From his old site [1] (not available now)

How does one get started as a pipe maker? In my case it was a natural transition from a longtime hobbiest wood carver and inveterate pipe smoker. In 1981, I combined these two pursuits and entered and won a national pipe carving contest. From then on there was no stopping me. I've been crafting and selling pipes ever since from my workshop at the base of the beautiful green mountains of Vermont. 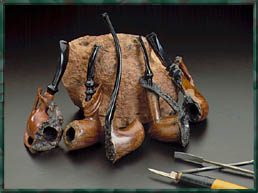 The following are excerpts from David Wright's forthcoming book on pipe-makers around the world. Mr. Wright is the past curator of the Museum of Tobacco Art and History in Nashville, Tennessee:

"Alfred Baier's carving style is very different. He specializes in figural briar pipes and highly stylized freehand pipes unlike any other pipes on the market. His figural pipes are reminders of the early Saint-Claude briar pipes in the 19th century and meerschaum pipes of the late 19th and early 20th centuries. Many of his figural pipes are carvings of heads including President Lincoln, Sherlock Holmes, a golfer, a bulldog, a wolf and a lion. He also carves figurals in a style that is more story oriented such as a image of a mermaid, a beaver chewing on a stick or a squirrel leaping from a tree. This style closely emulates many of the meerschaum carving styles of the 19th century.

Baier uses on some of his freehands a technique similar to openwork. He carves channels and openings in the briar giving the overall shape of the pipe an appearance of tiny land bridges or footpaths of beautifully exposed briar. He uses this technique to connect the top of the bowl to the end of the shank where the stem is joined or around the front of the bowl to the foot. Whenever possible, he leaves the very attractive, original rough outer surface of the briar intact on the bowl's top and bridgework. This gives the 'bridgework' a natural appearance and feel of a real footpath through the woods.

Baier's carving can be characterized as graceful and flowing. He has a wonderful treatment of the wood both in figurals and freehands. In particular his treatment of the shank area is often finished in carved swirls and folds carefully cut into the wood. It is here he joins the mouthpiece to the shank in a subtle almost camouflaging manner as the lines and form of the shank is repeated in the turnings of the stem. He skillfully combines the rough texture of the outer plateau with the smoothness of the finished briar and the whole is brought together with the graceful swirls and contours of the flowing openwork. Alfred Baier's work is nothing short of wonderful and his talents and skills in the world of pipe carving are astonishing.

Alfred Baier's pipe making abilities are a gift of natural talent. He is self taught and has been carving pipes for 20 years of which the last 17 have been in a professional capacity.

Working by himself, Baier uses a band saw, drill press, knives, gauges, rasps, files and sandpaper. His only choice of wood for pipe making is the highest quality Grecian plateau briar. Baier sees briar pipe carving as an art form, and his whole carving philosophy is 'I approach each pipe project as if I am creating a fine piece of sculpture.' He believes a pipe, like a fine piece of sculpture, 'must be visually pleasing from any position, front, rear, sides, top and bottom'.

Before Baier begins to carve one of the 300 or so pipes he will carve this year, he completely seasons his plateau briar with a special substance he has developed to remove the impurities from the wood. He then continues with the drying process to 'insure a cool, mellow and flavorful smoking experience'.

Once a block has been decided upon for carving, he roughs out the shape with the band saw. Baier then uses knives and files to carefully refine the shape and smooth the contours and curves of his work of art. He smoothes and polishes the wood with several grades of sandpaper. a light coat of alchohol-based stain is applied to bring out the beauty and grain of the pipe. The wood is then finished with a natural vegetable wax for a light sheen. Baier uses vulcanite and lucite stems for his pipes. The final phase to complete his pipe is to match the shape and style of the pipe with a compatible stem. Alfred Baier engraves his name and date on the shank of the pipe with a compatible stem. All of his pipes are commissioned by clients and sold direct.

Alfred Baier is a member of several regional and national sculpture and wood carving associations. In 1981, he was presented with an award for Excellence in Pipe Crafting by the Confrérie des maîtres-pipiers in Saint-Claude, France."

How to commission a figural pipe

Although I've made literally thousands of standard and free-hand pipes over the years, my first love is figural pipes. The procedure for commissioning one is as follows: You relate to me the idea that you have in mind. This can be done by phone, in person or e-mail. Based on your concept, I submit a life-sized drawing for your approval together with suggestions for changes you may wish to make if any. You will also receive a cost estimate. My figural carved pipes start at $350 for a simple relief carving on the bowl. Pipes with a complete carving in-the-round start at $500. Upon receipt of a 50% deposit, I then execute the pipe over a period of anywhere from three weeks to a month or longer, depending on complexity of design and back log of orders.