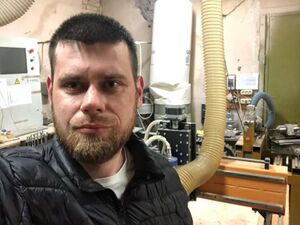 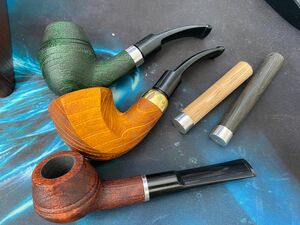 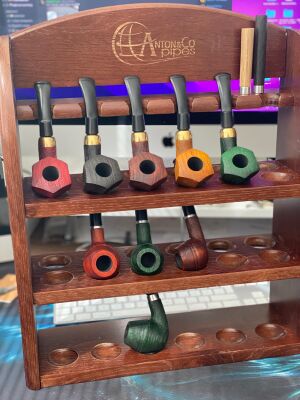 Anton & Co. Pipes consists mainly of father and son, Alexander and Ivan Antonenko, who have their workshop in Lviv in Ukraine, not far from the border with Poland. Alexander is a former fighter pilot who started his own business producing wooden articles and cigarette holders in the late 90s and early 2000s. Since the early 2000s, production has grown considerably and pipes were added to the range. In 2010, his son Ivan joined the business after graduating from the National Forestry University.

Pipes are mainly made from maple wood, which has a long tradition in Ukraine. Occasionally, oak, bog oak, or pear wood are also used. Maple is a material that actually grows "on the doorstep", is very fire-resistant, easy to work with, and has a neutral flavor of its own. Moreover, it is a tree species that is neither particularly rare nor endangered. In this respect, the choice of material was not particularly difficult. Since 2020, however, even more has happened. Pipes made of imported briar have been added, and the company has also started making pipe stands from ash wood. Ash is particularly known for its long-lasting quality and beautiful grain. The company now (2022) widens it's assortment of smoking accessories for pipe smokers.

The briar pipes are sandblasted in-house, and they have a very robust, grippy and honest appearance. Any crevices or spots that appear are not treated, but are part of this natural product. The focus here is clearly on flawless usability, less on aesthetics. Another special feature is the aluminum and brass shank rings. Most pipes have an acrylic mouthpiece, which is fully made in- house. The shapes are rather classic, but here, too, one is still in the "discovery phase". Most pipes are for 9mm filters, others are without filters. All products from Anton & Co. offer an attractive price-performance ratio.

Anton & Co. is also very active in designing and producing figural pipes and has very modern machinery for it. They are also making very fine and delicate pencil shank pipes, which are rarely seen anywhere else. Especially not in factory pipes. Ivan and Alexander are also very active in the Ukrainian pipe community where they sponsor some of the slow smoking contests. Furthermore, the company offers pretty, hand-cast brass pipe tampers.

Note: Due to the latest events in Ukraine, they have lost their former main- market and are looking for distributors, especially for the North American market.