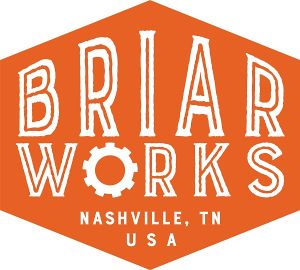 Pipe makers Todd Johnson and Pete Prevost began work in 2012 to change the perception of what serially produced pipe manufacturing could be. That project evolved and grew and in 2013, BriarWorks began operations in Nashville, TN. Through hard work, ingenuity, and tenacity BriarWorks is producing some of the finest pipes ever made in a serial production environment. Providing customers with an enjoyable experience via a beautiful, high quality product, at an affordable price, is the primary goal at BriarWorks.

Leveraging a wealth of handmade pipe making and design experience, BriarWorks is establishing a new bar for quality in the pipe industry.

Modern technology and design meet old world craftsmanship with the BriarWorks brands of pipes. BriarWorks Classic, BriarWorks Bambino, and BriarWorks Signature lines all start as machine made pieces that are assembled and hand finished by a talented team of pipe finishers, with many years of pipe making experience between them. BriarWorks Handmades are one of kind, hand made shapes with hand cut mouthpieces.

The BriarWorks Classic line is inspired by the the shapes of the venerated pipe factories of the early to mid 20th century. Simpler shapes, a lower price point, and the same high level of detail and hand finishing that go into all BriarWorks pipes make these a popular choice with novice and experienced pipe smokers, alike.

The BriarWorks Bambino line are modified versions of the BriarWorks Classic shapes. More compact and sporting a flush fit mouthpiece, Bambinos make a great pipe for on the go. Bambinos have the same chamber diameter as BriarWorks Classics so a relaxing, long smoke isn't sacrificed for a smaller scale pipe.

The BriarWorks Signature line are serially produced/factory made pipes modeled after the signature handmade shapes from some of the world's most respected pipe makers. The first BriarWorks Signature, the Todd M. Johnson briar calabash, set a new bar for the creative possibilities available in a serial production/factory setting. Throughout 2015, the Signature line was expanded with a new and improved Mag-Top calabash and a number of other shapes designed by Todd. Spring 2016 brought another milestone to the brand with a shape designed by a pipe maker not associated with BriarWorks, the Adam Davidson Fig. Plans for more shapes and collaborations with noted pipe makers are in the works as BriarWorks continues to strive to make the best serially produced pipes in the world. 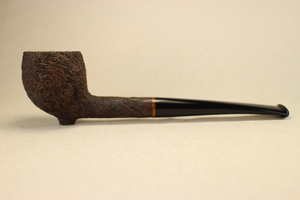 The BriarWorks handmade line are one of a kind, hand-shaped pipes with hand-cut mouthpieces, created by BriarWorks' team of skilled pipe makers. BriarWorks Handmade pipes typically feature freehand style shaping with stems and adornments made of a variety of high quality materials, like ebonite and boxwood.

Alongside our own BriarWorks brands, we also do private-label manufacturing for a number of companies, both large and small. To find out how BriarWorks can help you expand your current offerings, solve problems in your supply chain, or provide manufacturing solutions for your briar-based startup, please contact us, and let’s discuss your project.

BriarWorks President Pete Prevost and a team of skilled craftspeople execute the day to day operations of BriarWorks. Pete, Sam Adebayo, Emily Adebayo, Jesse Perdue, Bill Shalosky, and Micah Redmond are all involved in multiple phases of design, manufacturing, finishing, administration, marketing, and sales. Each member of the team brings a lot of experience and variety of skill sets to BriarWorks, including many years of handmade pipe making experience from Pete, Sam, Bill, and Micah. 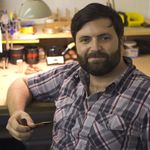 Pete grew up in Bakersfield, CA and developed an early interest in music. That interest led to a career as a professional musician and a move to Nashville. Pete’s music career helped him develop friendships with a wide variety of people, including musician and pipe maker Jody Davis. Pete’s interest in pipes along with guidance from Jody and Todd Johnson, led to Pete becoming a highly skilled pipe maker. In 2012 Pete’s career took a decidedly pipe-centric focus, when Todd asked him to help start BriarWorks. Pete has been involved in every phase of development at BriarWorks, including design, production, and the daily responsibilities of running a business. In 2016, Pete was promoted to President of BriarWorks and now manages all of the day to day operations. When Pete isn’t working hard at BriarWorks he spends most of his time being a father and husband to his lovely family Melissa, Bennet, and Lawson. Somehow, he still finds time to make world-class handmade pipes and some excellent salsa verde.

More information about Pete and his work can be found at http://www.prevostpipes.com. Pete’s handmade pipes are also available from http://www.pipeshop.ru, http://www.scandpipes.com, and http://www.smokingpipes.com.

Jesse grew up in Amarillo, TX and moved to Nashville to pursue a career as a professional drummer. Jesse comes from a family of engineers and inventors and holds a number of patents, himself. His interest, education, and experience in industrial design and manufacturing technologies led him to BriarWorks in 2013. Jesse’s role as Manufacturing Manager includes pipe design and oversight of production technology and scheduling. In addition to Jesse’s work in design, he is a musician and avid outdoorsman. If he’s not inventing/designing something, he’s playing drums, fishing, hunting, and tearing up country roads on his motorcycle.

Sam joined the BriarWorks team in March of 2015. Sam grew up and lived in Woodstock, IL before relocating to Nashville, TN to join BriarWorks. Sam is one of BriarWorks’ talented team of pipe makers and is involved in all aspects of production and finishing, both as a pipe maker and as Production Supervisor. Sam began making pipes like many other pipe makers, as a hobby, but that quickly developed into a more serious enterprise. Sam’s handmade pipes exhibit a strong sense of dynamism through his use of interesting colors, sinuous lines, and playful proportions. When Sam isn’t at the BriarWorks shop he enjoys making music, polishing his boot collection, and spending time with his wife Emily and their adorable son, Ayo.

Emily joined the BriarWorks team in March of 2015, along with her husband Sam. Emily is originally from the Woodstock, IL area. After joining BriarWorks, she quickly became an invaluable part of the team, despite not having previous pipe making/finishing experience. Emily is involved in many aspects of BriarWorks’s operations, including finishing, quality control, customer service, social media, and keeping the rest of us in line. Emily balances all of her involvement in BriarWorks with the responsibilities of raising her super cute son, Ayo, and husband, Sam. Despite all those responsibilities she finds time for sewing, music, and the weighty burden of being a Chicago Bears fan.

Originally from Jacksonville, FL, Micah joined the BriarWorks team in May of 2015 and is involved in pipe production and finishing, administration, graphic design, and customer service. Micah started making handmade pipes as a hobby in 2009 and after many years working in the white collar business world, made a career change from spreadsheets to sanding discs. Micah’s previous work experience helps round out the wide range of skill sets needed to run a business and manufacture pipes, making him a valuable asset to the BriarWorks team. Micah’s handmade pipes are influenced by American, Japanese, and Danish pipe making aesthetics with some modern and fun applications of proportion and color. When Micah isn’t at the BriarWorks shop working on pipes, he dabbles in music and art.

Originally from Columbus OH, Bill joined the BriarWorks team in June of 2015 and is an integral part of the production and finishing team. Bill received a BFA from the Columbus College of Art and Design and his education and experience in a variety of fine arts disciplines, including woodturning and ceramics, have had a direct influence on his work as a pipe maker. Bill started making handmade pipes about ten years ago under his own name and for Chheda pipes, and has developed a style that makes most of his work recognizable from across the room. He also worked refurbishing and repairing countless estate pipes when he worked at Smokers’ Haven in Columbus. Bill has a wealth of pipe making experience and knowledge all of which is evident in the quality of his work. Bill is an avid fisherman, firearms enthusiast, self-described metalhead, and wearer of vests.

More information about Bill and his work can be found at http://www.billshalosky.com. Bill’s pipes are also available from http://www.blueroombriars.com and http://www.smokingpipes.com.