The "Magic Inch" System has been a Carey's tradition for over 50 years, with over 1,000,000 sold. The "Magic Inch" is an air chamber inserted between the imported briar bowl and the vented mouthpiece which allows cool outside air to enter and mix with the warm tobacco smoke inside the "Magic Inch" chamber. Tobacco tars, oils and moisture, are squeezed out of the smoke. The residue drops to the bottom of the chamber and is absorbed by the Papyrate sleeve. From its rich tradition and thousands of satisfied customers, this pipe is sure to be your smoking favorite for life. 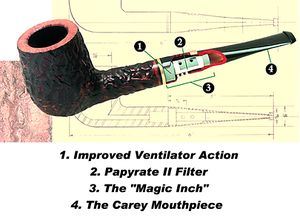 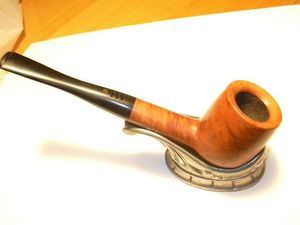 Carey Magic Inch pipes can be readily identified by a boxed letter C on the stem, along with a distinctive series of three vent slits and the Carey Magic Inch name stamped into the side of the bowl.

For more information on the "Magic Inch System" http://www.eacarey.com/magicinchinfo.html