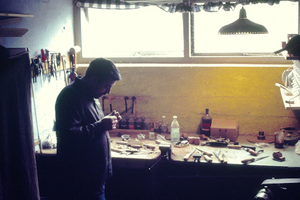 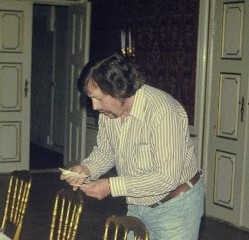 He designed and cut his very distinctive pipes, which were characterized by the famous "Danish Design", which radiated beautiful design lines, which gave his pipes their very own touch. He also experimented with the composition of materials in his pipes, something that gave them an exciting distinctiveness.

Pipe-making remained a sideline, though at times he was very productive. He was primarily active as a pipe maker in the years 1965 until his death in 1984, where he left 16 completely finished pipes, which only appeared at his wife's death in March 2015. How many pipes he got cut and sold in total is not known. He also left behind a larger collection of purchased Bruyererod bricks, which should have become Chr Henrik pipes, but they were sold to a pipe shop in Copenhagen run after his death.

He had his pipes exhibited at several "fashion week" in Copenhagen at the time, where especially Japanese customers showed great interest in his pipes.

He had a collaboration with i.a. the pipe shops W.Ø. Larsen and Pibe-Dan in Copenhagen, where he exchanged experiences with their pipe makers, and in addition had his pipes for sale in their shops.

All original Chr Henriks pipes have on the bottom of the pipe marked: "Chr Henrik Denmark". In addition, a total of four of his very beautiful pipe boxes have survived.