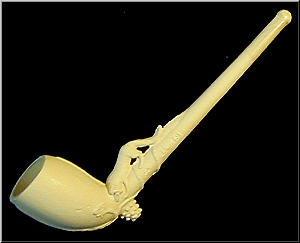 The topic of clay pipes is very extensive. Therefore here only in a nutshell: clay in this case is almost always a very fine white clay. Low-quality "clay" pipes are actually made from porcelain forming techniques known as slip, and poured into a mold. These are porous, of very low quality, and impart unwanted flavors to a smoke. Top-notch clays, on the other hand are made in a labor-intensive process that requires beating all air out of the clay, hand-rolling each pipe before molding it, piercing with a fine wire, and careful firing. Traditionally, clay pipes are unglazed.

Clays burn "hot" in comparison to other types of pipes, so they are often difficult for most pipe-smokers to use. Their proponents claim that, unlike other materials, a well-made clay pipe gives a "pure" smoke, with no flavor addition from the pipe bowl. In addition to aficionados, reproductions of historical clay styles are used by some Historical re-enactors.

Clay pipes were once considered disposable items and the large quantities discarded in the past are often used as an aid in dating by industrial archaeologists. 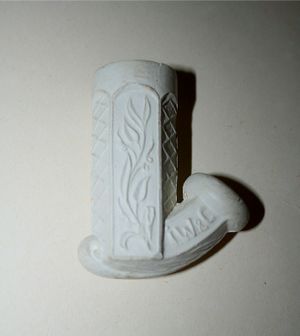 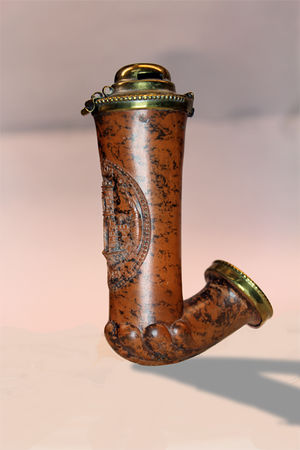 The illustration (to the right) is a 19th century example with the seal of the town of Selmec on the front. The seal represents two salamanders which legend tells us led residences to the gold deposits. Hammer and pick are also represented. These clays represent an entirely different clay pipe tradition from the English clay pipes. These shapes are based on Turkish clay pipes which entered Europe from the East. 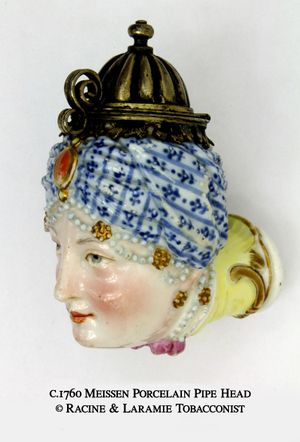 The first type of porcelain produced by Johann Friedrich Böttger was a refined and extremely hard red stoneware known in Germany as Böttgersteinzeug. It retained very crisp definition in its cast and on applied details. The Böttgersteinzeug could be polished to a gloss before firing. Models were derived from Baroque silver shapes and Chinese ceramic examples. Meissen's production of a hard paste white porcelain that could be glazed and painted soon followed, and wares were put on the market in 1713. Multicolour enamelled painting was introduced by Johann Gregorius Höroldt in 1723, with an increasingly broad palette of colors that marked the beginning of the classic phase of Meissen Porcelain.

"Pub Pipes", the long stemmed clay pipes, were essentially public pipes used in pubs (public houses) that were given to patrons to use. After a patron used it, the tip (and I dont know how much of the tip this would be) was broken off so the next person could use it. This way, you werent smoking someone elses spittle along with the tobacco. I dont know if this was due to health concern (although I am sure it helped to prevent spread of germs) or just because it may seem gross to put a pipe in your own mouth after having been in someone elses.[1]

It is unclear if this is just a myth or a hard fact but Ivor Noël Hume says:

There are thousands of pipe fragments found in Williamsburg. An early explanation for their ubiquity had it that in colonial-era taverns pipes passed from mouth to mouth, but that in the interests of hygiene the previously lip-gripped section was broken off and thrown away. There is no documentary support for that notion, but it is known that used pipes were placed in iron cradles and heat cleansed in bake ovens before being issued to the next round of smokers.[2]

On the other hand the author of the Keens Steakhouse Website states:

The tradition of checking one's pipe at the inn had its origins in 17th century Merrie Old England where travelers kept their clay at their favorite inn - the thin stemmed pipe being too fragile to be carried in purse or saddlebag.